This is the second of a series of entries organized by Hannah Star Rogers, reflecting on the 2018 convening of the Helsinki-based Bioart Society. The first entry was “Notes on Field_Notes: Expanding the Possibilities of Bioart.”

“The Technology of Divination” is the second of three entries for Art Journal Open reflecting on the experiences of participants at the Bioart Society’s Field_Notes conference in autumn 2018. During this event, held every autumn at the Kilpisjärvi Biological Station in the far north of Finland, the Society brings together the expertise of artists, scientists, and humanists to explore the environment of Lapland, Finland, and to consider a designated theme. The 2019 gathering was titled “Ecology of Senses,” and proposed a broad exploration of how humans and nonhumans sense the environment, including but not limited to what it is possible to sense, the bodily experience and instrumentation of sensing, and why we sense the world. Each programmatic group within Field_Notes is organized by a host who assembles a group around a theme relating to “Ecology of the Senses” and brings together individual and group expertise to investigate relevant ideas and practices. I hosted The Second Order group, tasked by the Field_Notes organizers with observing and intervening in the work of the other groups. My background in art and science research had brought me into contact with the concept and medium of bioart before, but as early winter fell on Kilpisjärvi, I found a group of practitioners with a myriad of modes and methods which extended beyond my prior conceptions of bioart. This entry focuses on the work of two artists whose work during the Field_Notes session illustrates the aesthetic potential opening our instruments and materials to the myriad of entities in our surroundings and their methods of communication. These contemporary methods of divination can offer us meaning by directing our attention to things we cannot normally or do not usually sense, that is what we can interpret from the natural world which may be beyond our usual senses.

Field_Notes: Ecology of Senses was a weeklong field laboratory experience, created by the Helsinki-based Bioart Society, held at the Kilpisjarvi Biological Station in September 2018. The most noticeable feature of the meeting, for many who attended, was its emphasis on open inquiry as opposed to an outcome-driven mandate. This means that artists were invited to explore ideas without the constraints of deadlines or deliverables. Additionally, in contrast to many other residencies and workshops, this field lab format welcomes those with little or no experience with the environments into conversations about them. Participants apply to be part of specific groups, but are expected to show an interest in the subject, and the potential for engagement, rather than any specific skillset or ability match.

The emphasis of these discussions about instrumentation is ultimately on process, rather than outcome. It also fosters a diversity of modes of practice since learning a new protocol or way of listening to one’s own breath is genuinely elective. Some participants seemed to find this openness a challenge and, particularly in the first few days, inquired extensively about outcomes, but the Bioart Society ethos for Field_Notes is to encourage exploration by avoiding expectations. The results participants create are of their own choosing and may occur at the event or years after the experience. The artworks that are created have no allegiance to any particular set of mediums or thematic constraints. Even those artists who create works as part of the Field_Notes groups often produce very different types of work.

Given the multidisciplinary nature of this convening, participants bring a range of tools of a spectrum of disciplinary “trades”: some working instruments seen in the 2018 convening included sketchbooks, sound recorders, photography equipment, pH meters, rock hammers, agar plates, drones, and Finnish sauna branches. The function of these inspired curiosity at first, and later became part of our working methods, sparking conversations about avoiding technical instrumentation or replacing it with bodily sensing or meditative focus.

Contributors Lisa Swanstrom, digital humanities and literary scholar, and Sam Nightingale, London-based photographer and researcher, represent digital and experimental photographic techniques, respectively. As part of the program, participants were invited to join one of five groups. Both Swanstrom and Nightingale took part in the group “Augury: Machines which look at birds,” hosted by Martin Howse. The group considered the way that sensing the environment, with the body and with instruments, could open the potential of divination as an aesthetic practice to reveal meanings and even derive potential and information from objects, organisms, and states of change in the natural world. Divination, for these practitioners, seemed to be defined in opposition to understandings of the environment that might be constructed as shared or even universal, as in the case of the scientific use of technical instrumentation or data-driven interpretation of organisms or environments. Instead, divinations in this context denote a radical subjectivity such that an individual’s personal experience—for example, an interpretation of signs from animals or the weather—is taken to be meaningful. This process might well involve the use of geophysical sensors, barometers, electrical meters, and the like, but the use of those technologies is not to create a shared meaning for a group or community, but to provide personalized data for individual interpretation.

These two projects offer a glimpse into the wide variety of bioart-related projects inspired by the same textual and technical materials and similar environmental experiences that emerged from the Bioart Society’s Field_Notes. Howse described the ideas that animated his group in this way: “Sense and sensing are forms of divination, of prediction. Augury may be defined as the practice of interpreting omens from the observed flight or dance of non-humans, tracked by GPS or satellite; divining both the past and the future, not any present but sheer persistence which is beyond appearance, offering either transcendent meaning or only the earth . . . This group will decode the living and material discards of sense.”

In response to their Field_Notes experience in the Augury group, Swanstrom and Nightingale created artworks that probe our relationship to the earth through technologies that harness intuition and emergent visual phenomena. Swanstrom offers a technological divination tool that can be accessed here. The tool proposes itself as a solution for the wide array of information in the natural world and our individual inability to process it all. “Augury,” Swanstrom writes, “is the practice of deriving meaning from natural signs.” An initial version of the tool was offered on a single computer during an evening event arranged by Howse’s group to introduce their modes, methods, and creations to the rest of the Field_Notes participants. Users could input information about their recent experiences in the Lapland environment. The expanded tool offers users an online environment in which their attention is directed to particular parts of their own natural worlds. Swanstrom refers to the program as “a lyric algorithm for the Augury of Attunement,” which helps users pare down the overwhelming amount of ecological sensory data to provide personal focus. She contends that conceiving of divination in this form can be an important practice for ecological sensitivity. The work raises the resonances between the instructional recipes of divination through bibliomancy, which were used to make sense and create understandings by discerning signs in the natural world and the instructional recipes which are the software required to run all of the programs in our environments.

Nightingale approached divination through the production of unexpected images. He calls this process “photochemical alchemy.”  His Para-photo-mancy works, begun at Field_Notes as part of his group’s exploration of divination practices, are created using black-and-white negative sheet film. Even the images that have color originate from black-and-white film. The artist used three different types of film: aerographic film (originally designed for gathering surveillance imagery), radiographic film (use for medical x-rays) and a specially designed Japanese paper film. This process is an intentional departure from knowledge: it produces an unexpected image by using papers sensitive to various chemical compounds to develop the tracings of botanical specimens with unknown chemical compositions collected at Field_Notes. However, careful as the arrangements of chosen materials are, the results are unexpected because the chemistry of the plants has the potential to mix with the chemically treated papers in ways the artist cannot predict. Nightingale’s bodily manipulations of physical plant structures like berries and mosses and chemical condensation of images may appear at odds with Swanstrom’s focus on the digital encoding of ethereal thoughts and environmental imagery, but both works decontextualize organisms from the environment for the purpose of heightening the viewer’s focus on them. What the artists offer are tools of mediation—methods by which to separate available meanings from the vast number of observations and sensations (in one case, a digital instrument of reflection; in the other, a new way to think about the representation of the chemistry of organisms in our environments). The flight patterns of birds, the growth of algae, the enzymes produced by mushrooms are all separated from a blur of sensory input in the natural world through a process of a radical elimination of context. These artworks attempt to create access to potential understandings of patterns in the natural world at a scale the human mind can comprehend by creating selections for individual interpretation. Whether based on the appearance of totem animals or the form of melted wax, digital programs or photographic alchemy, these methods of filtering a host of potential materials and senses into an interpretation with individual meaning is the essence of divination.

Click on the images below to navigate to responses by Sam Nightingale and Lisa Swanstrom. 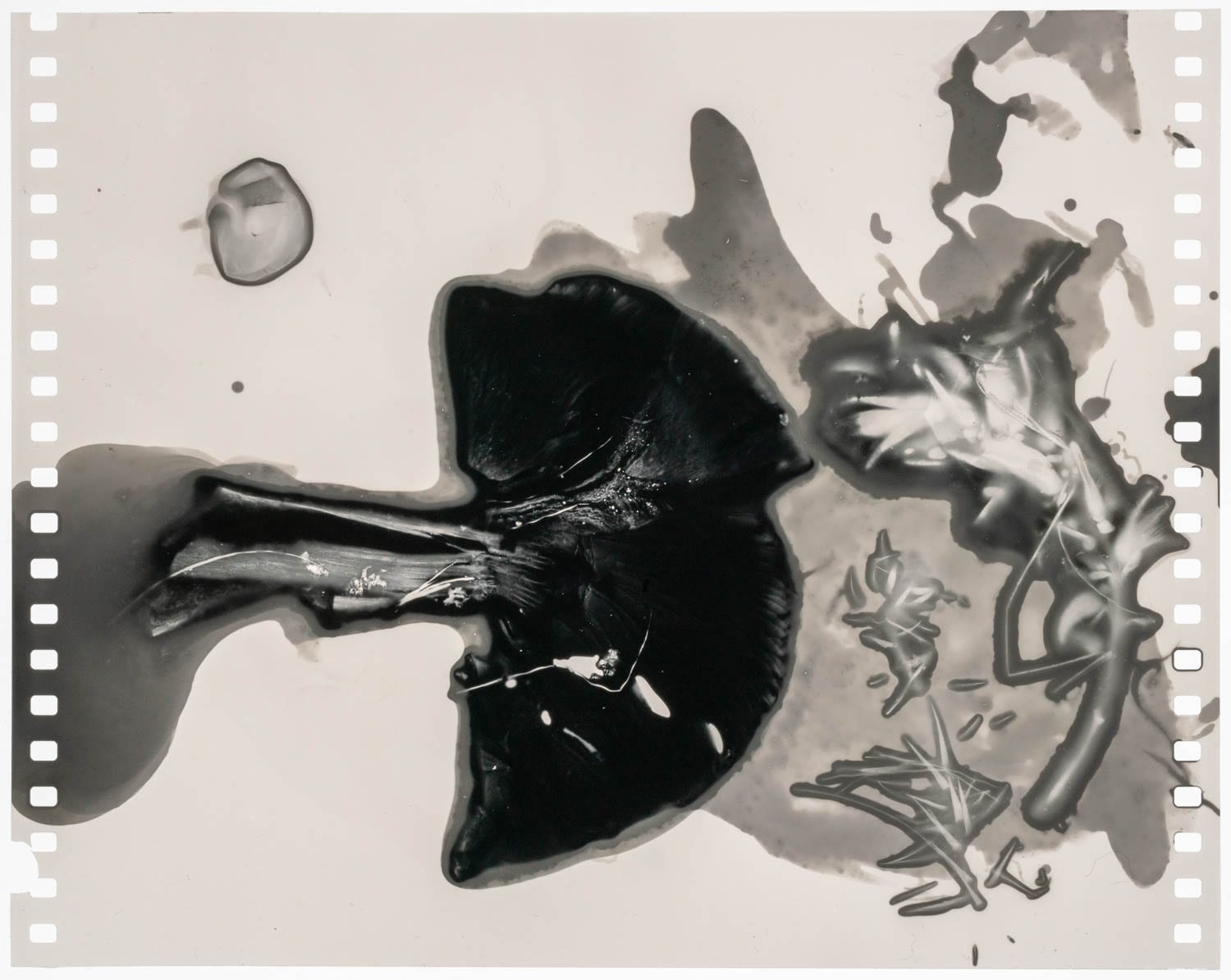 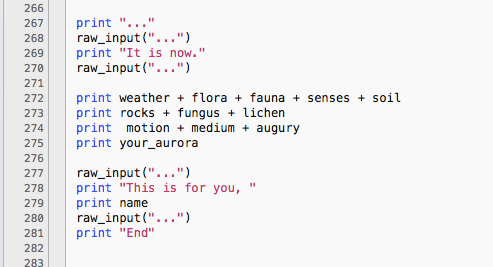 “divination.py”: A Lyric Algorithm for the Augury of Attunement
Lisa Swanstrom

Hannah Star Rogers researches the intersection of art and science, particularly critiques of science in contemporary art. Her publications have appeared in Leonardo, Configurations, The Kenyon Review, and the LA Review of Books. She received an MFA from Columbia University and a PhD from Cornell University in Science and Technology Studies. Her exhibition Making Science Visible: The Photography of Berenice Abbott received an exhibits prize from the British Society for the History of Science and an invited lecture to the Smithsonian Archives of American Art. She is past Director of Research and Collaboration for Arizona State University’s Emerge: Artists and Scientists Redesign the Future. Her current curatorial project Art’s Work in the Age of Biotechnology: Shaping our Genetic Futures will open in fall 2019. She is a visiting scholar in STIS at the University of Edinburgh and teaches at Strathclyde University.