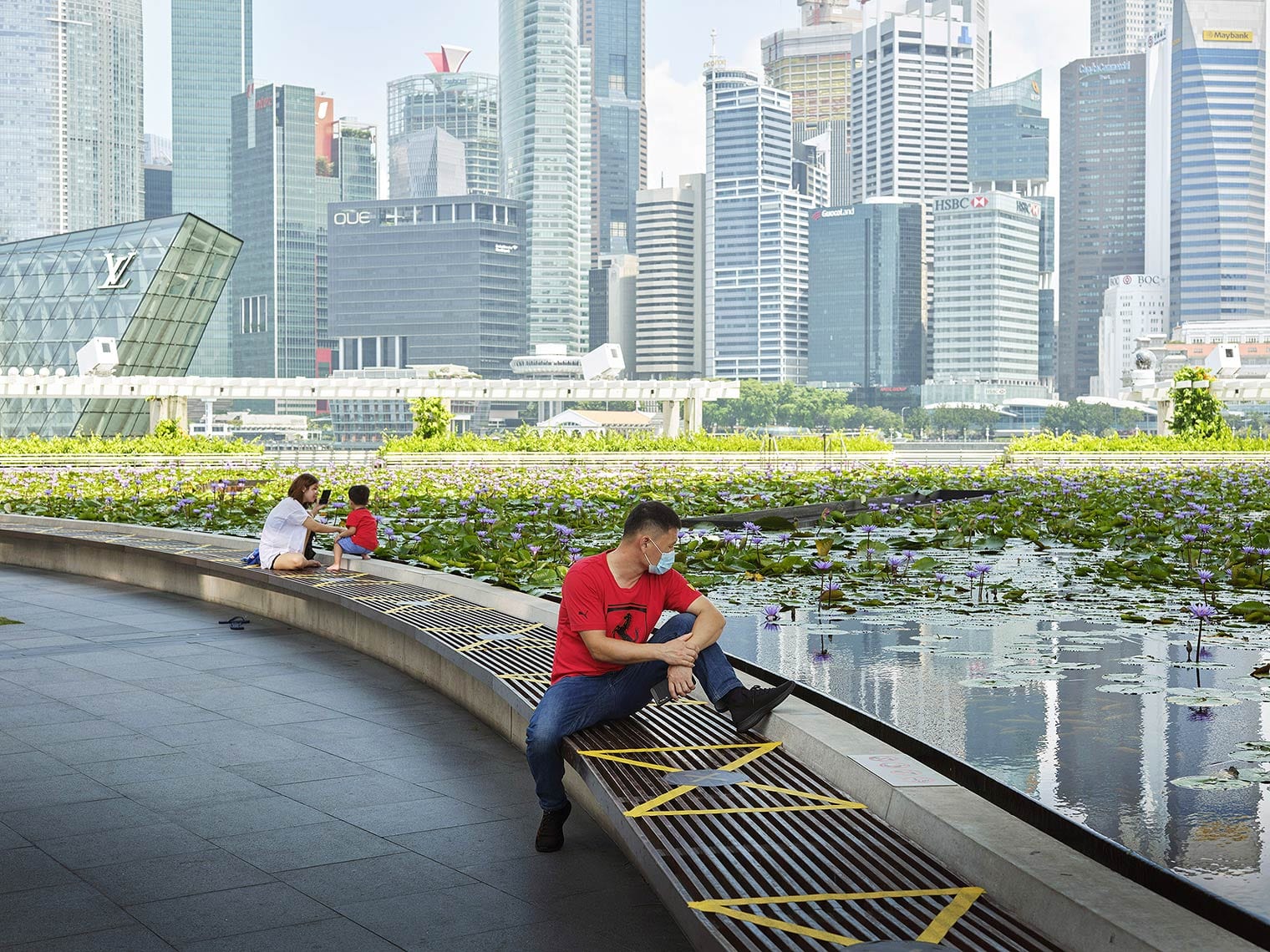 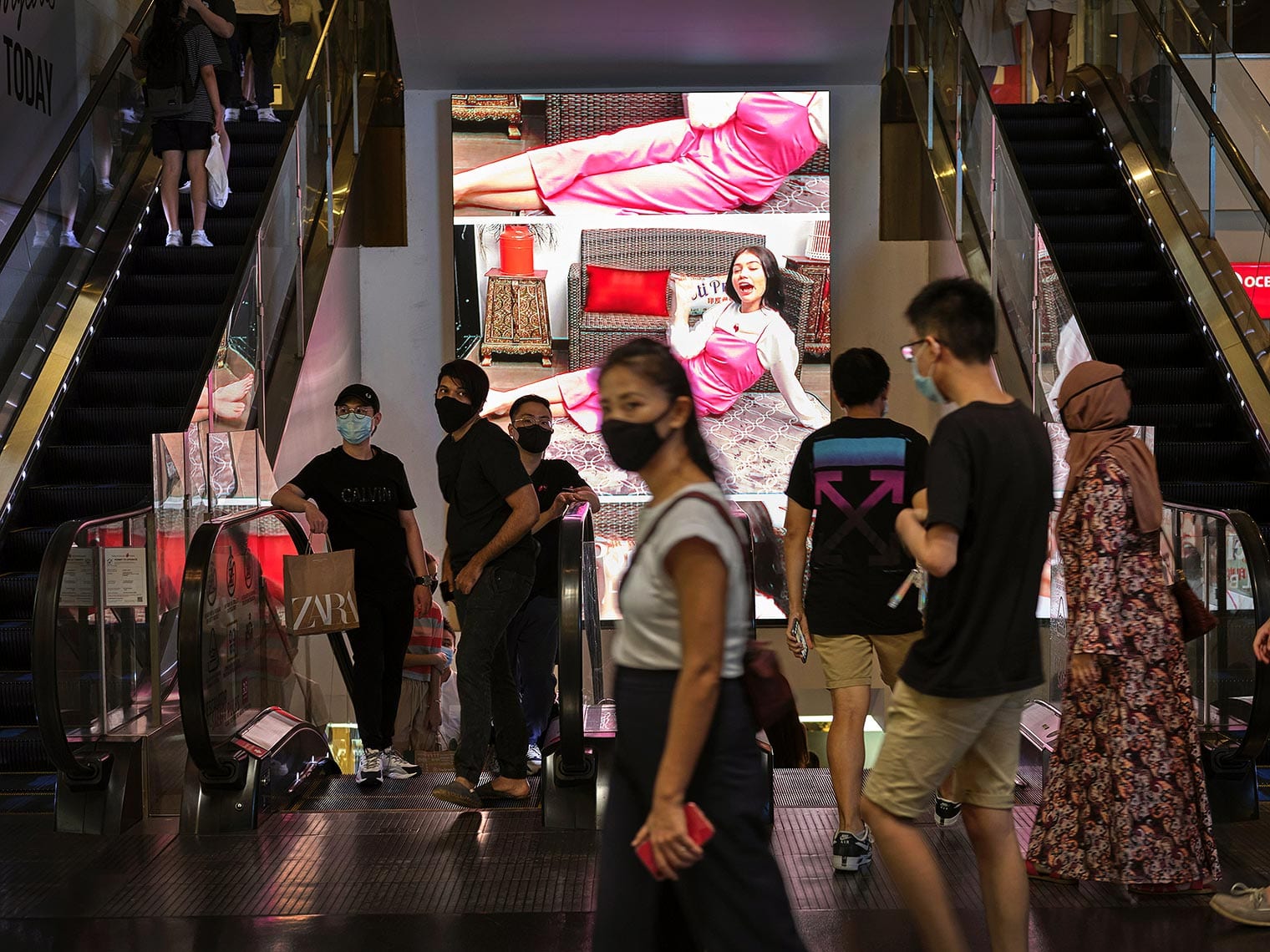 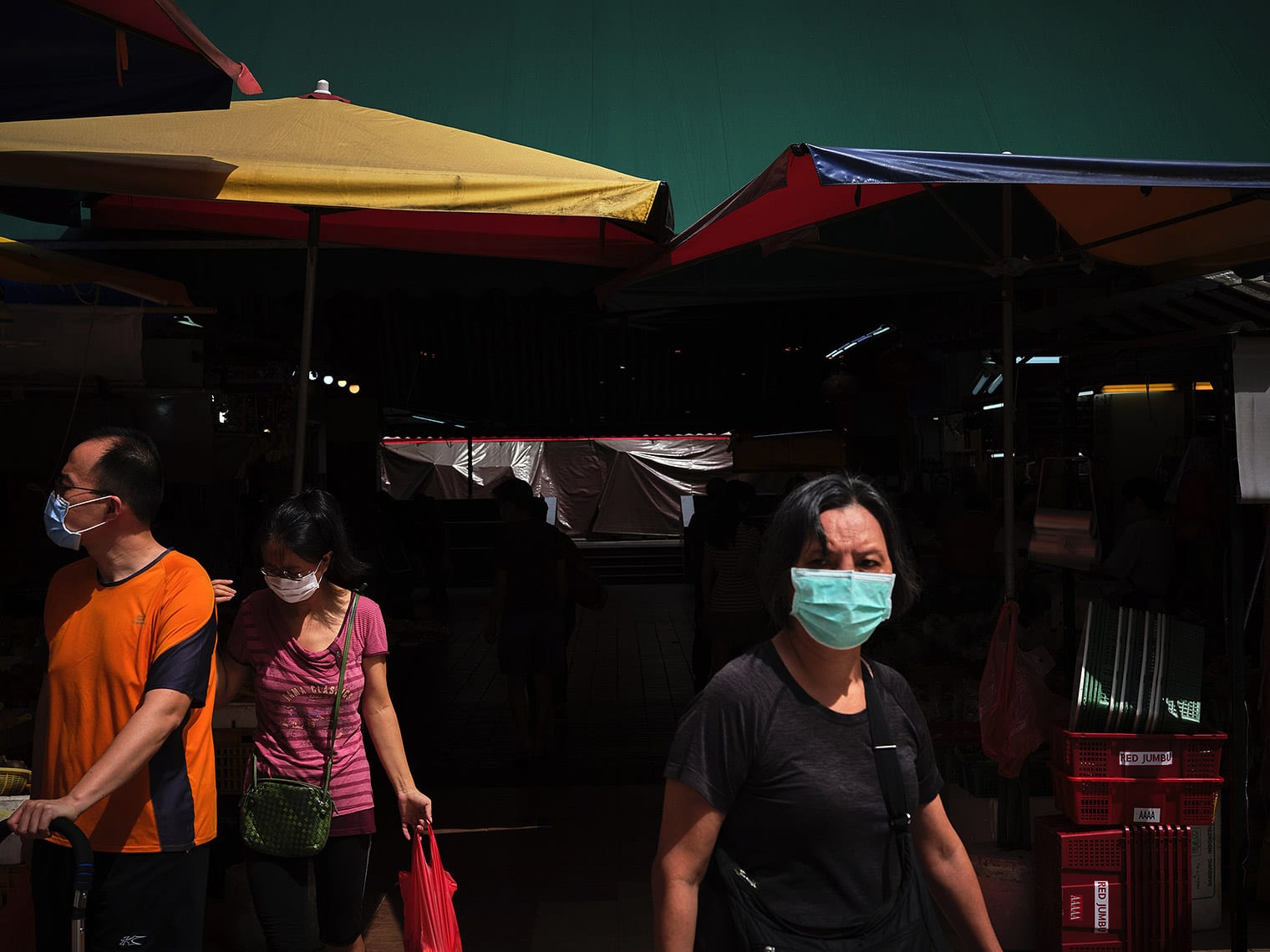 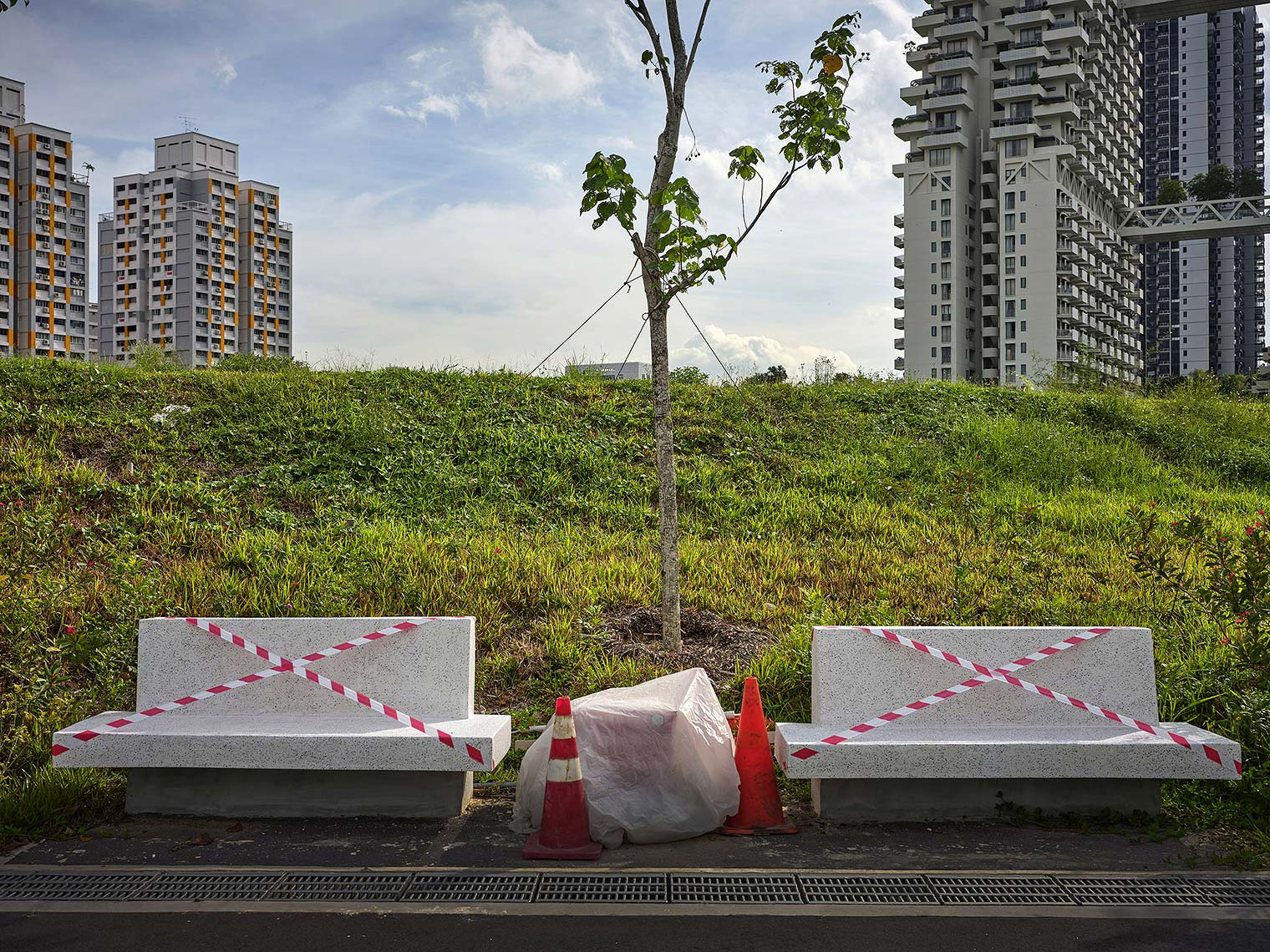 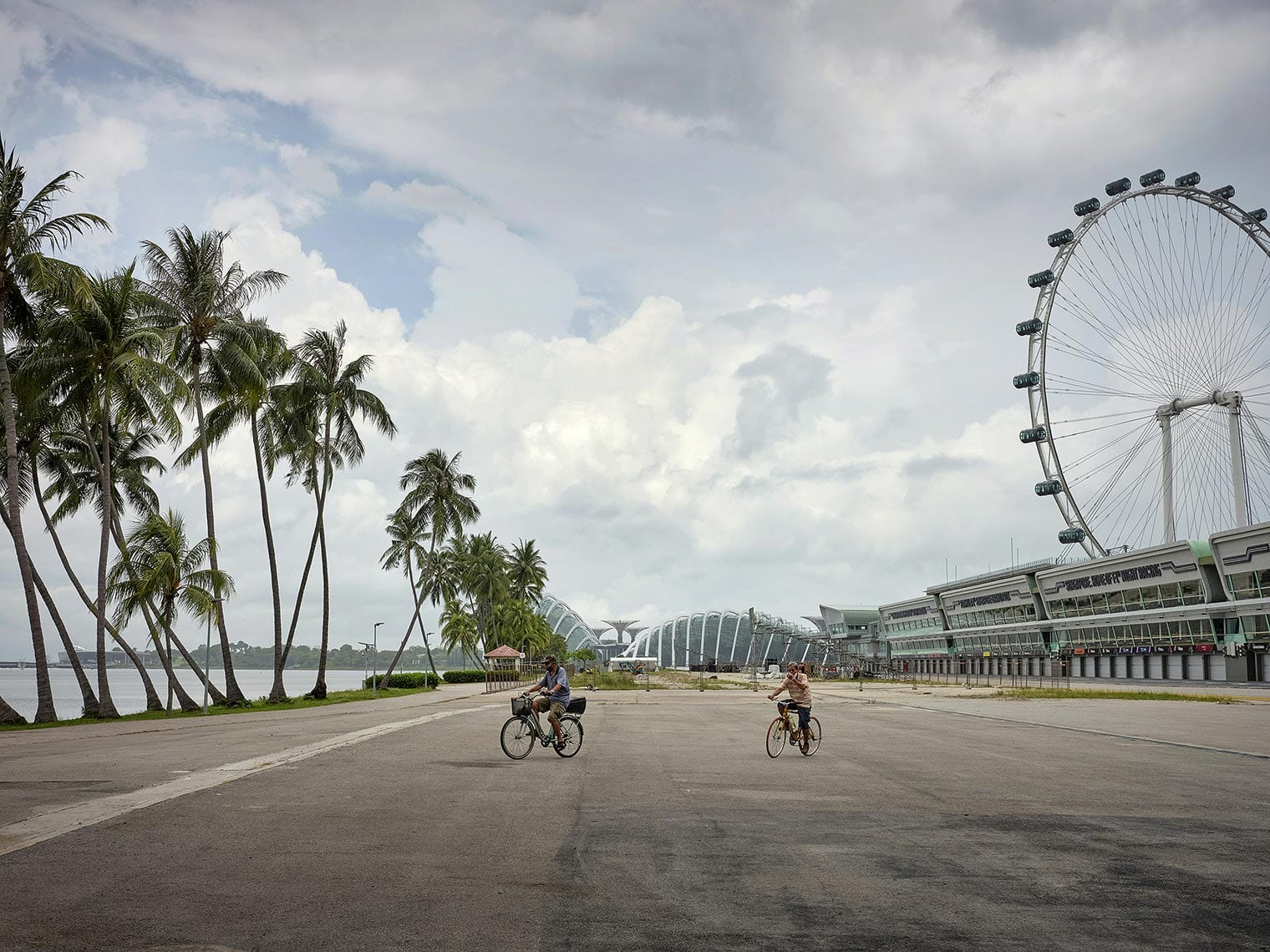 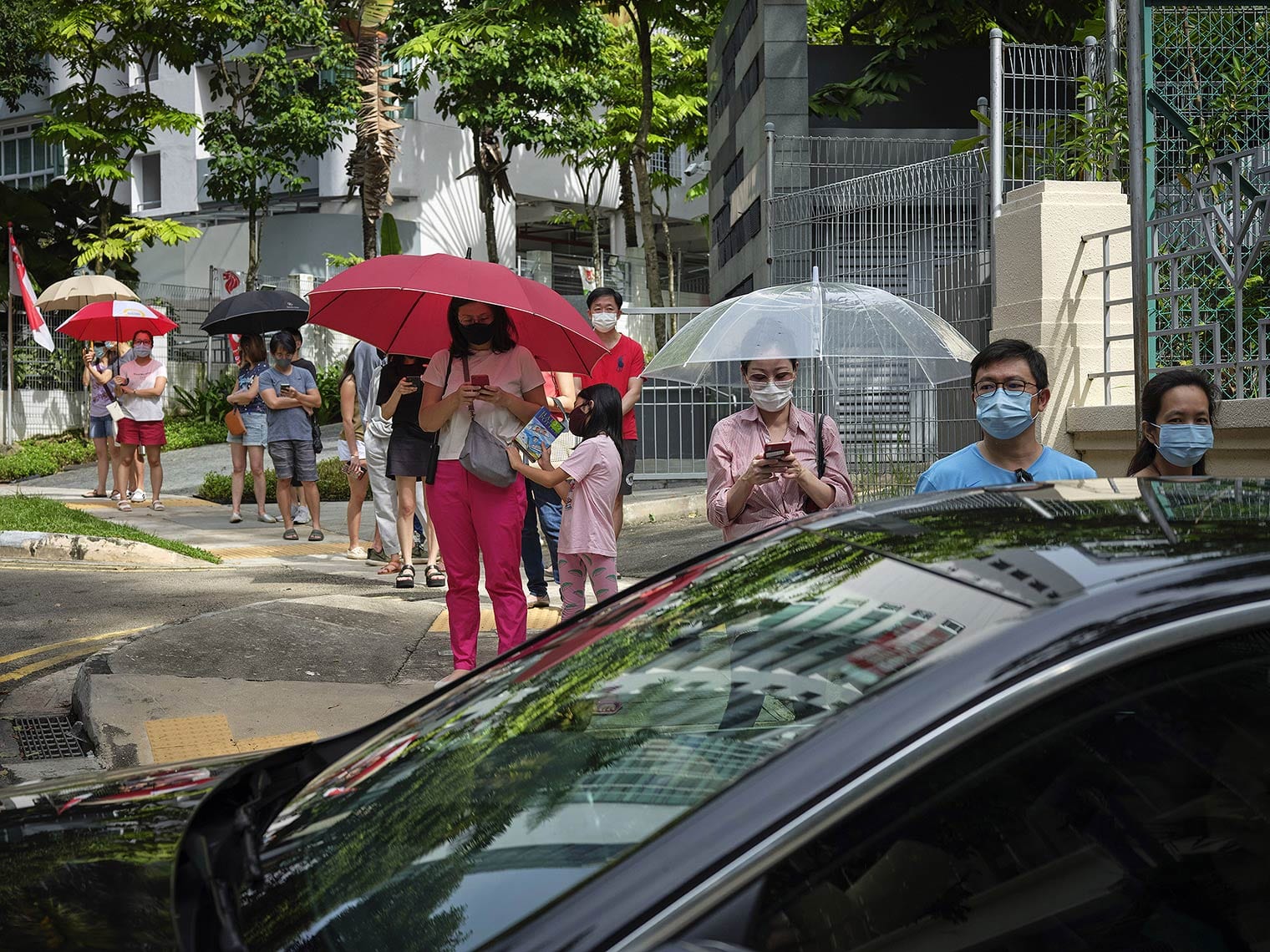 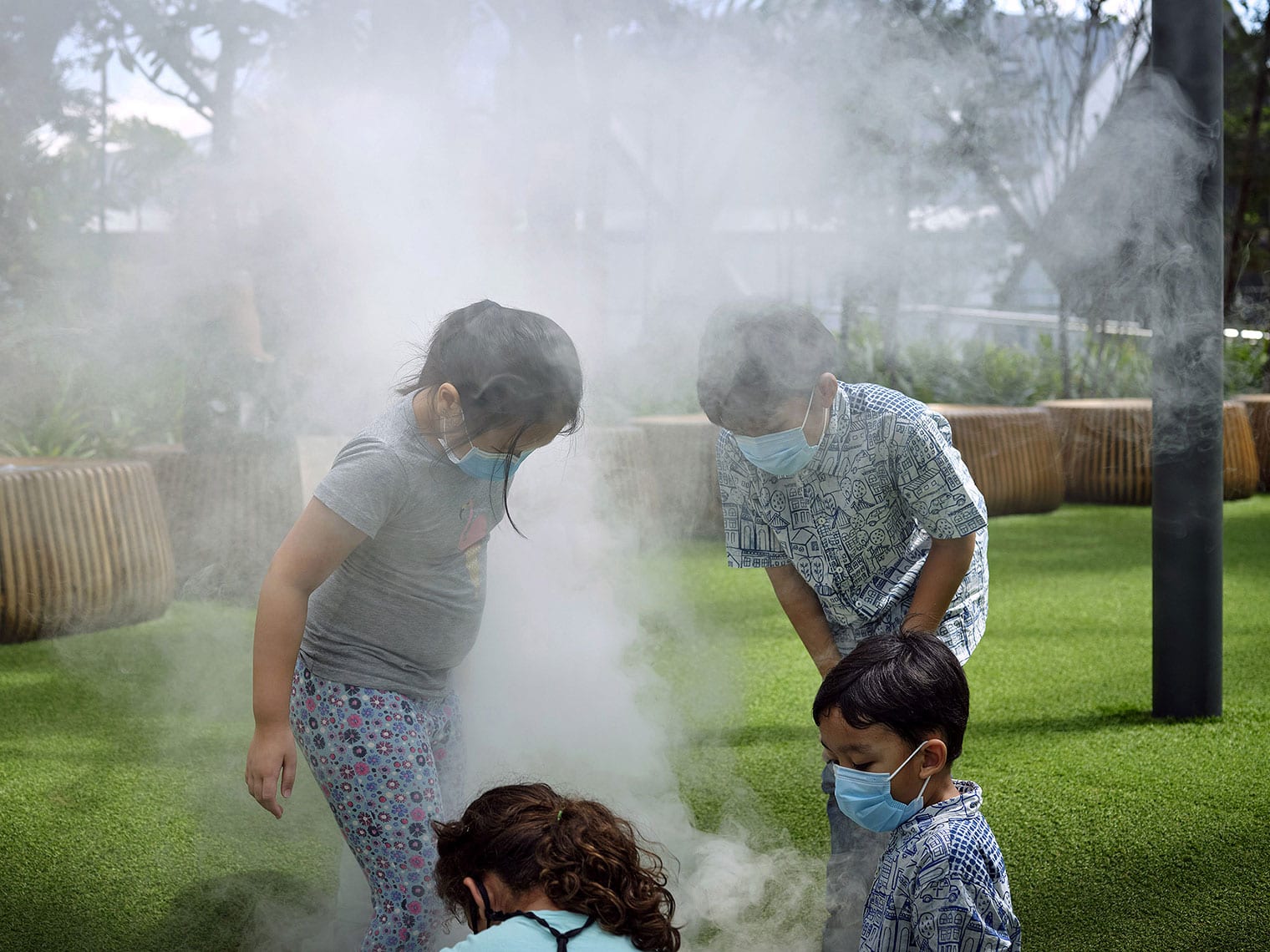 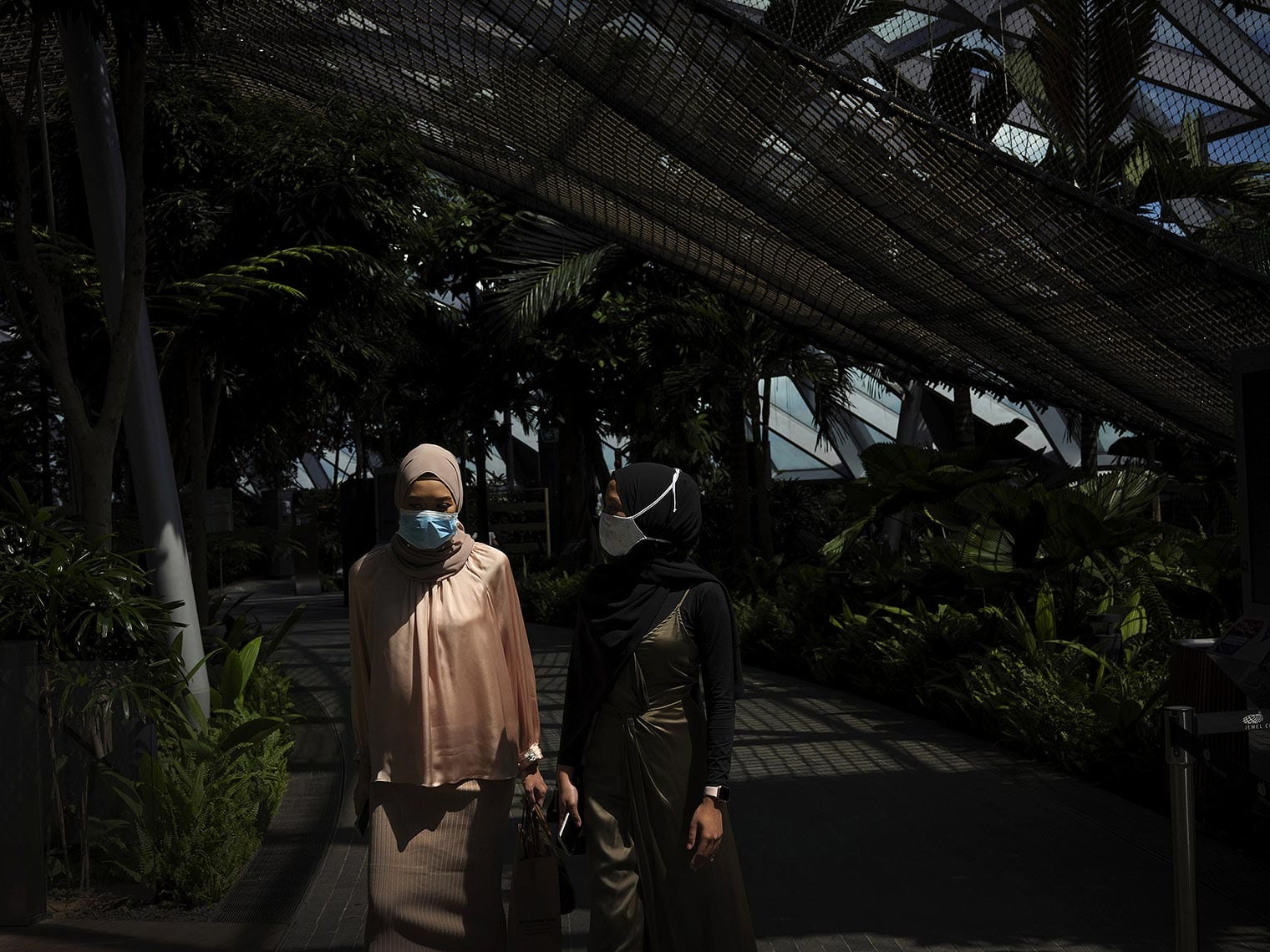 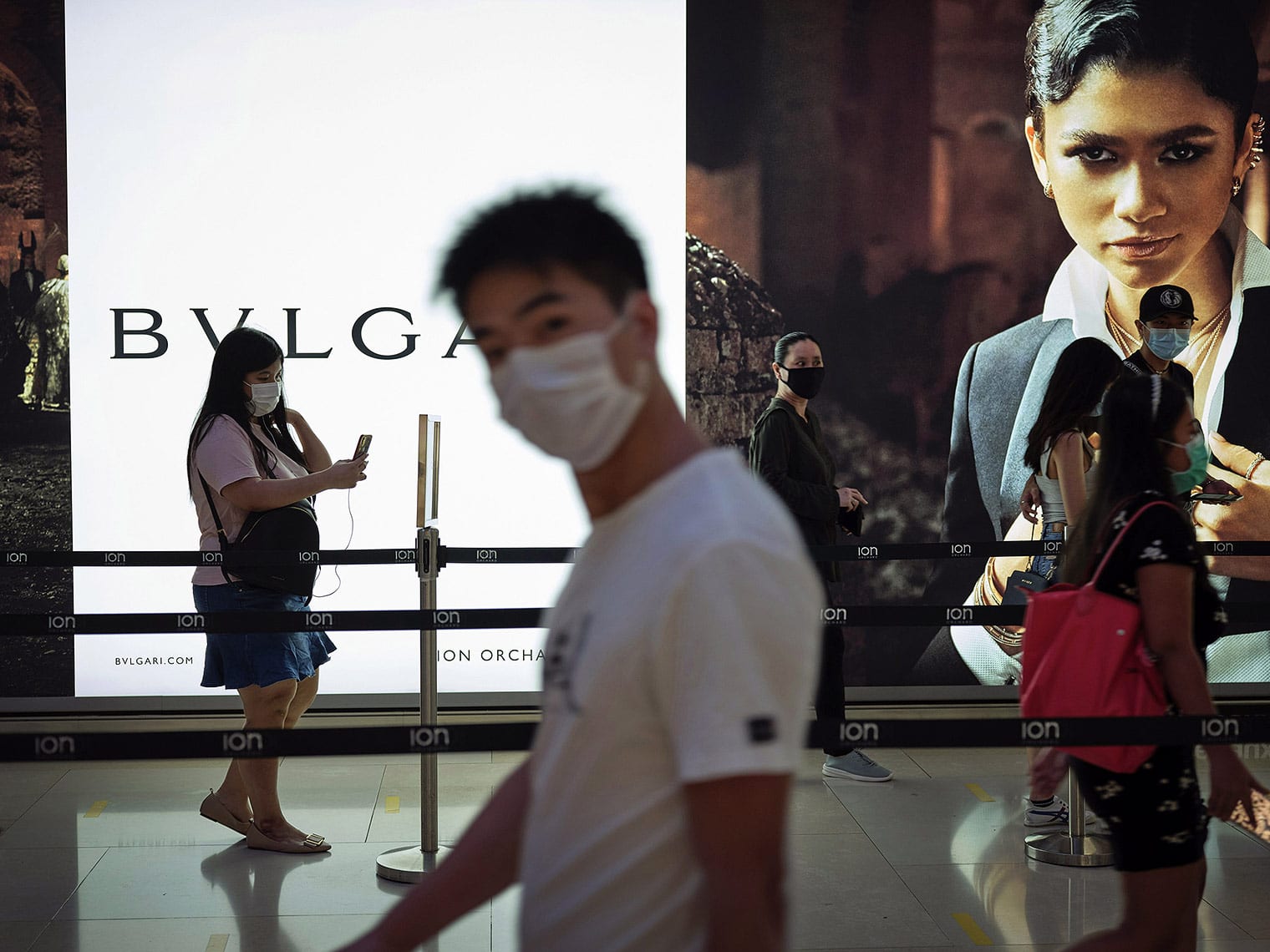 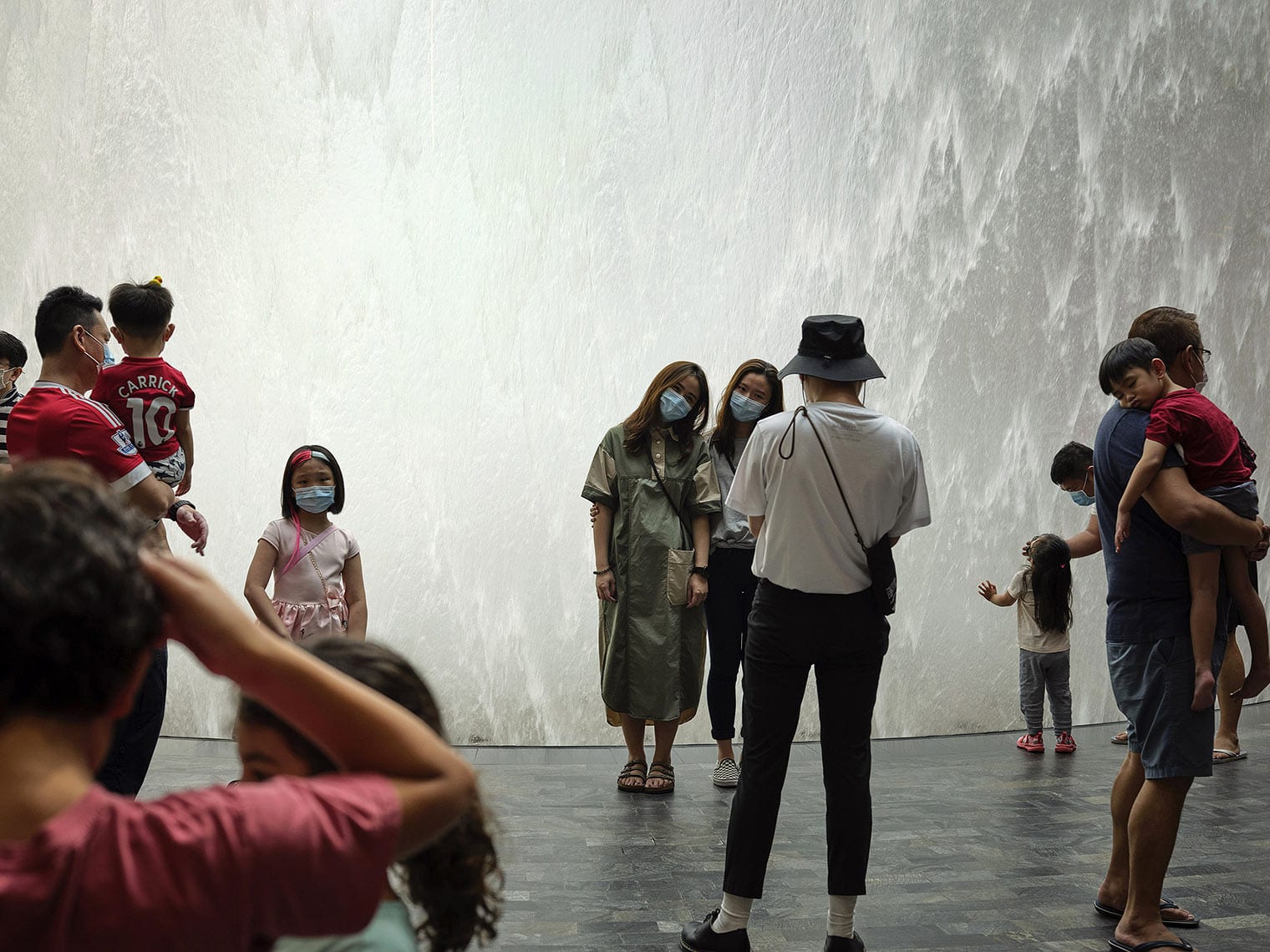 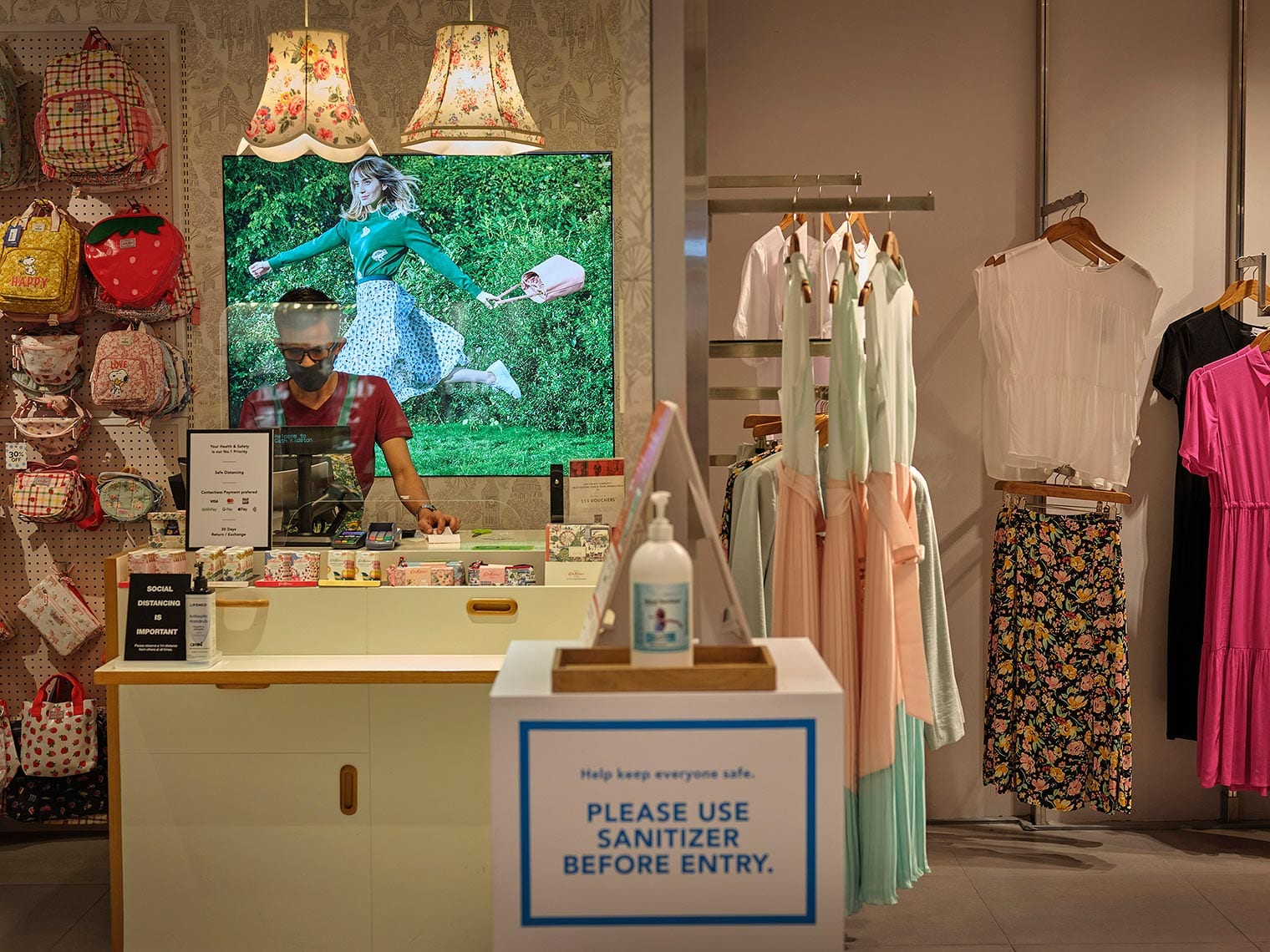 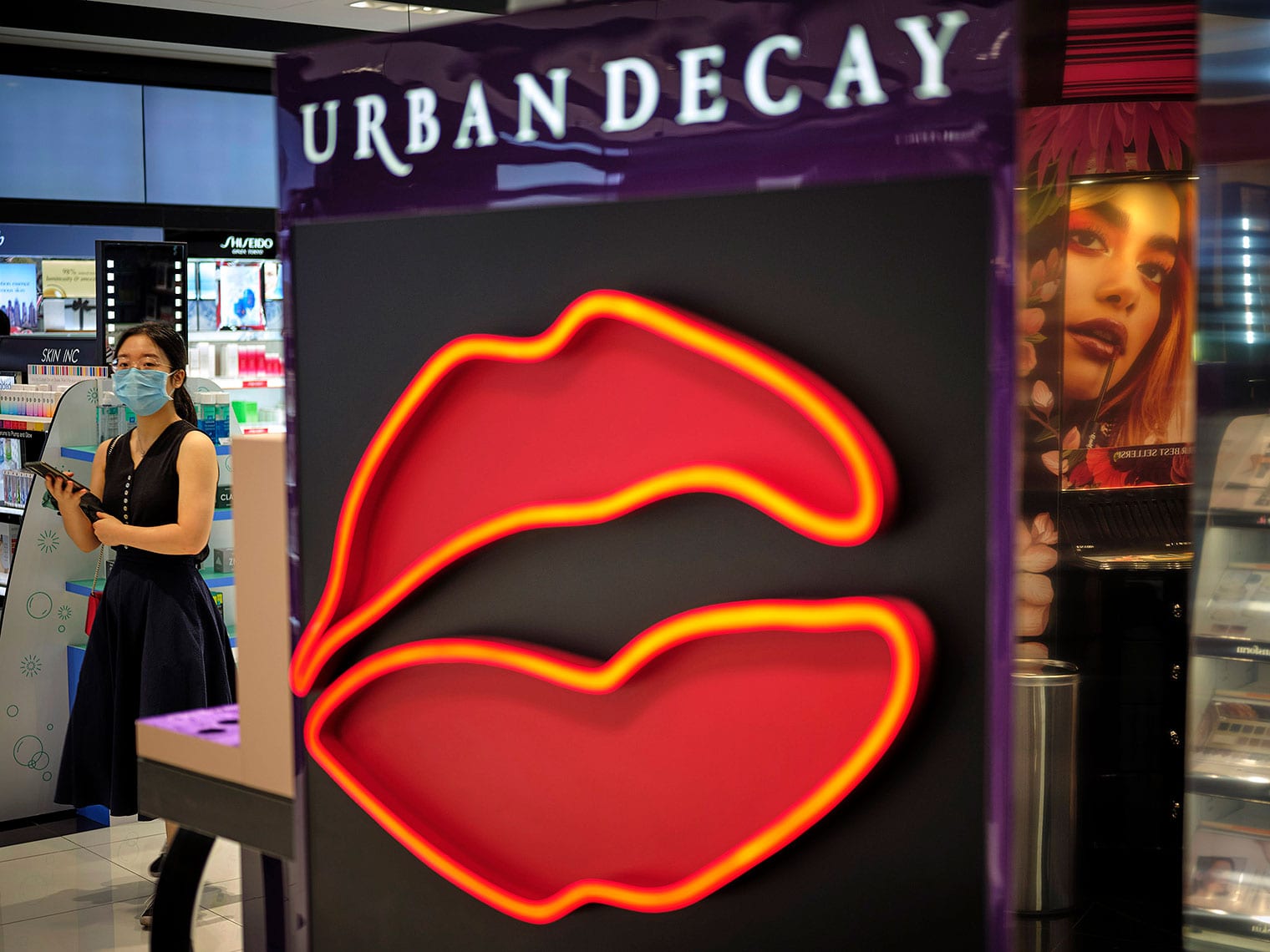 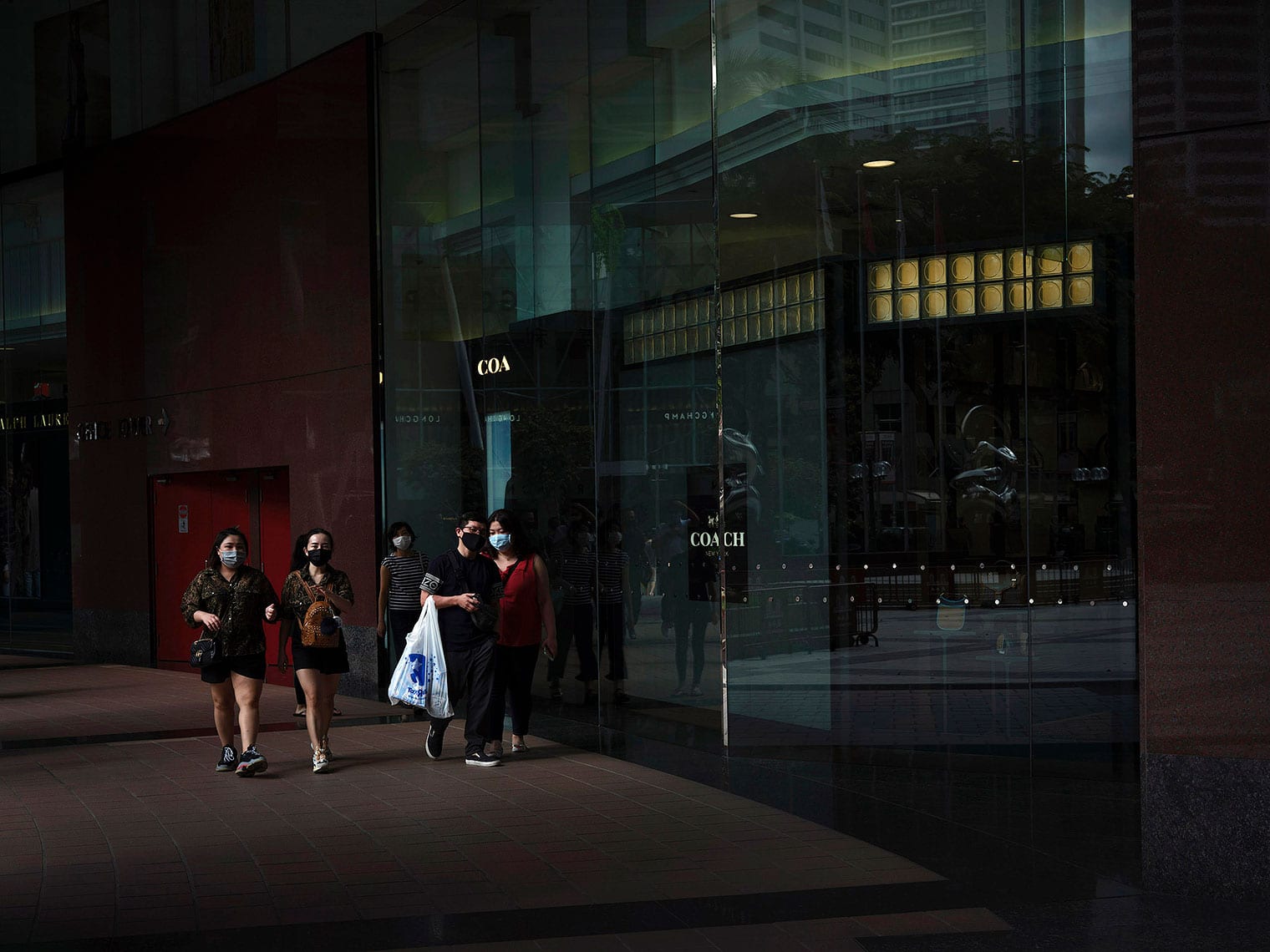 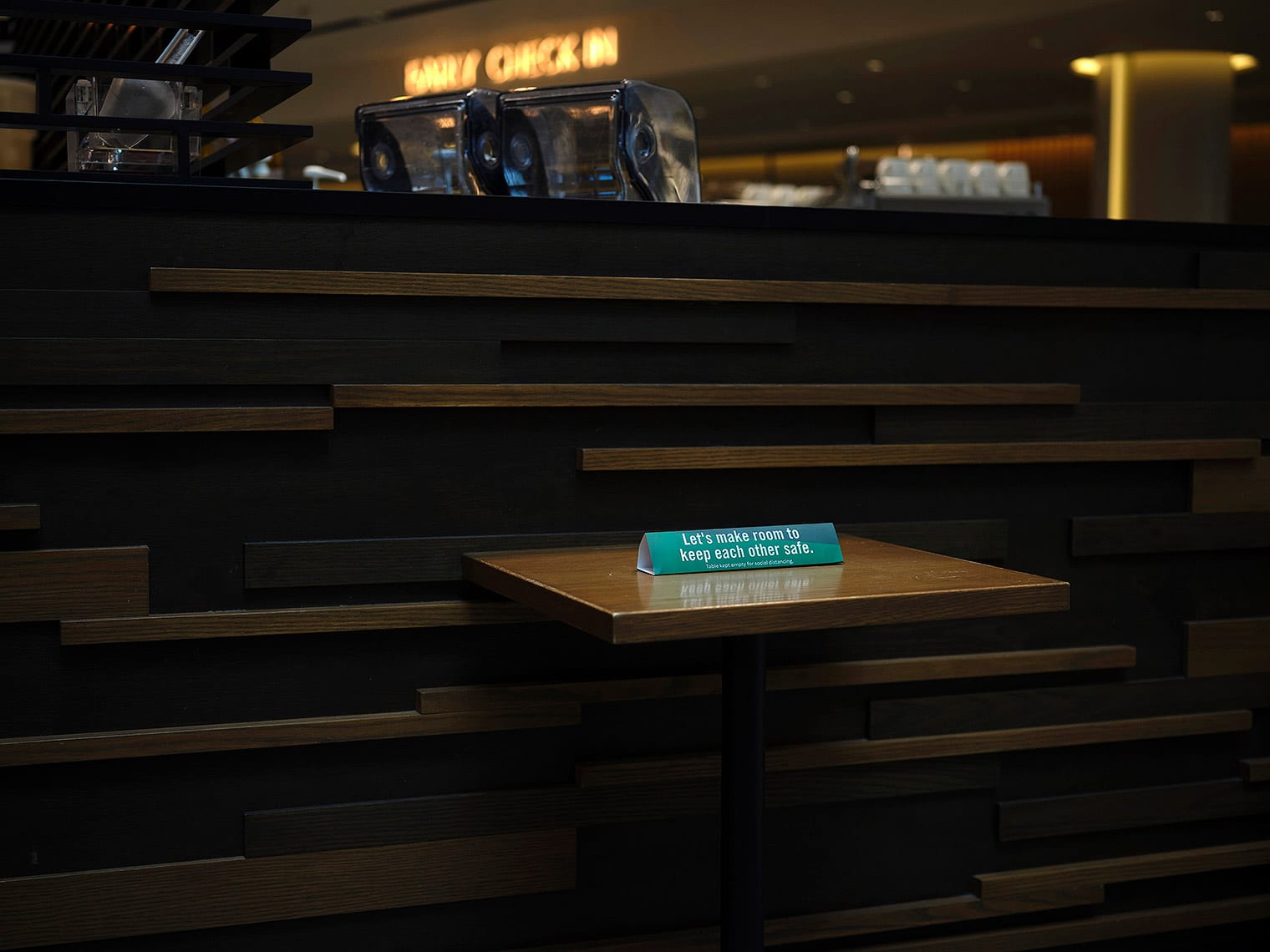 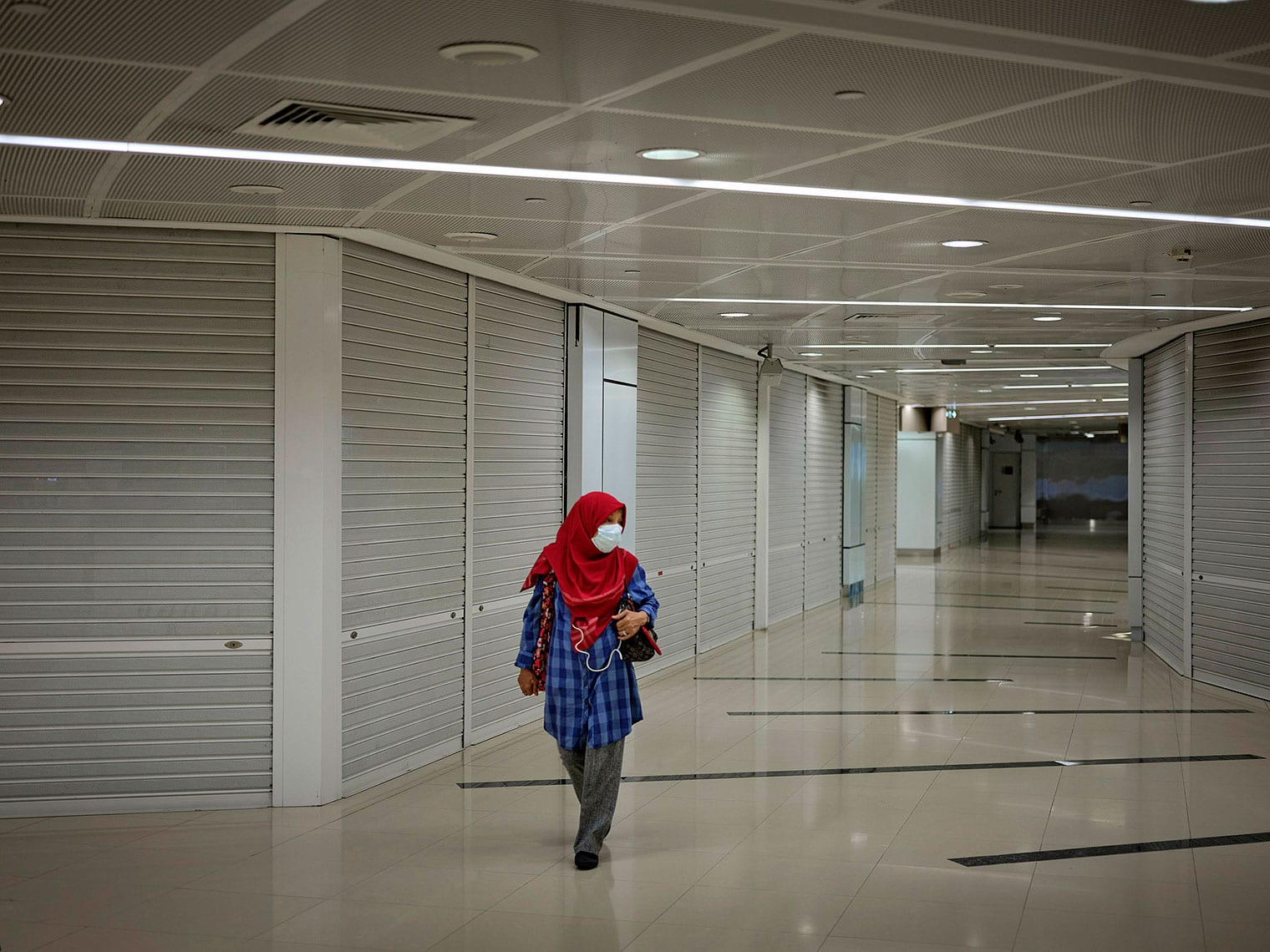 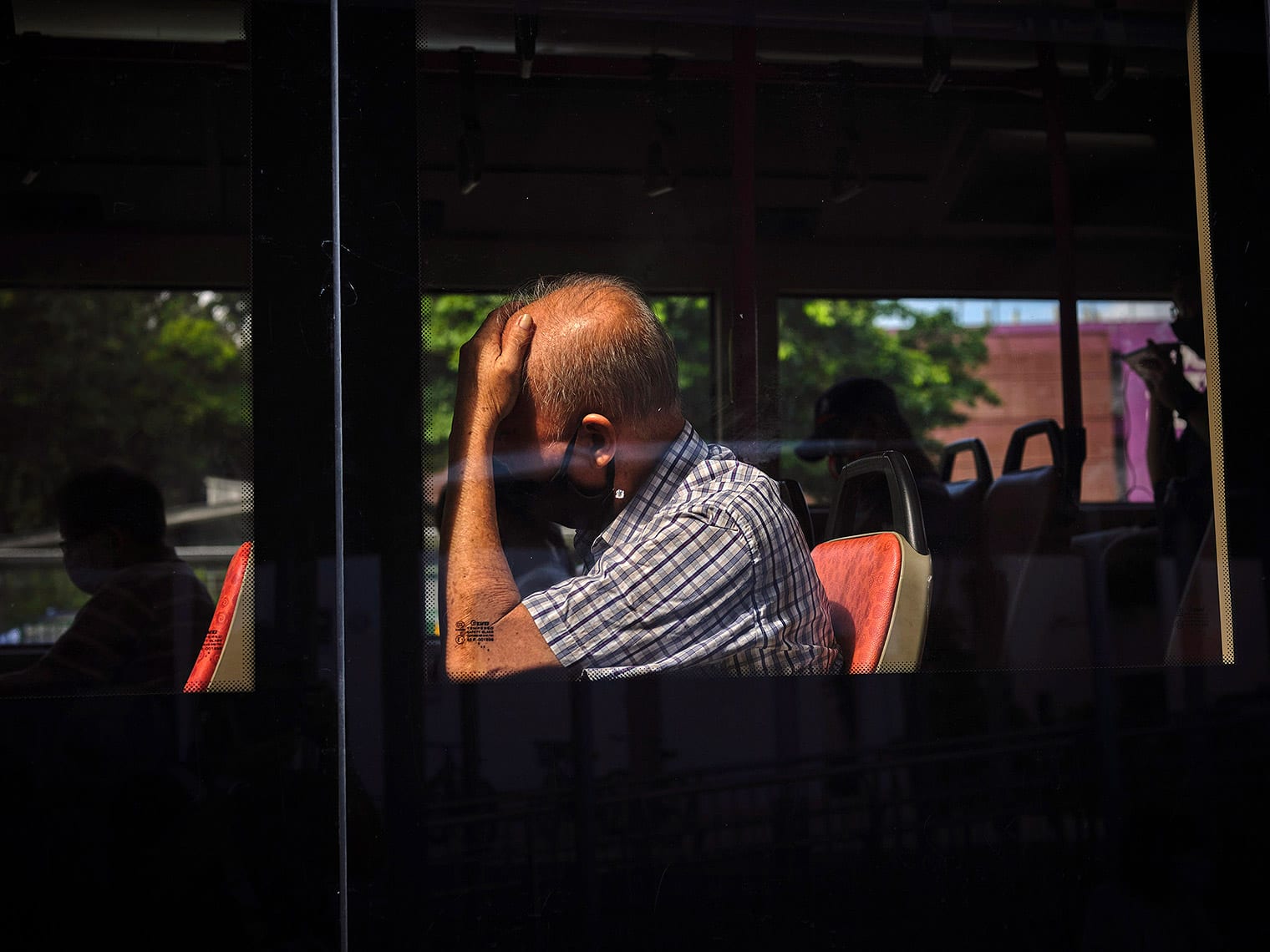 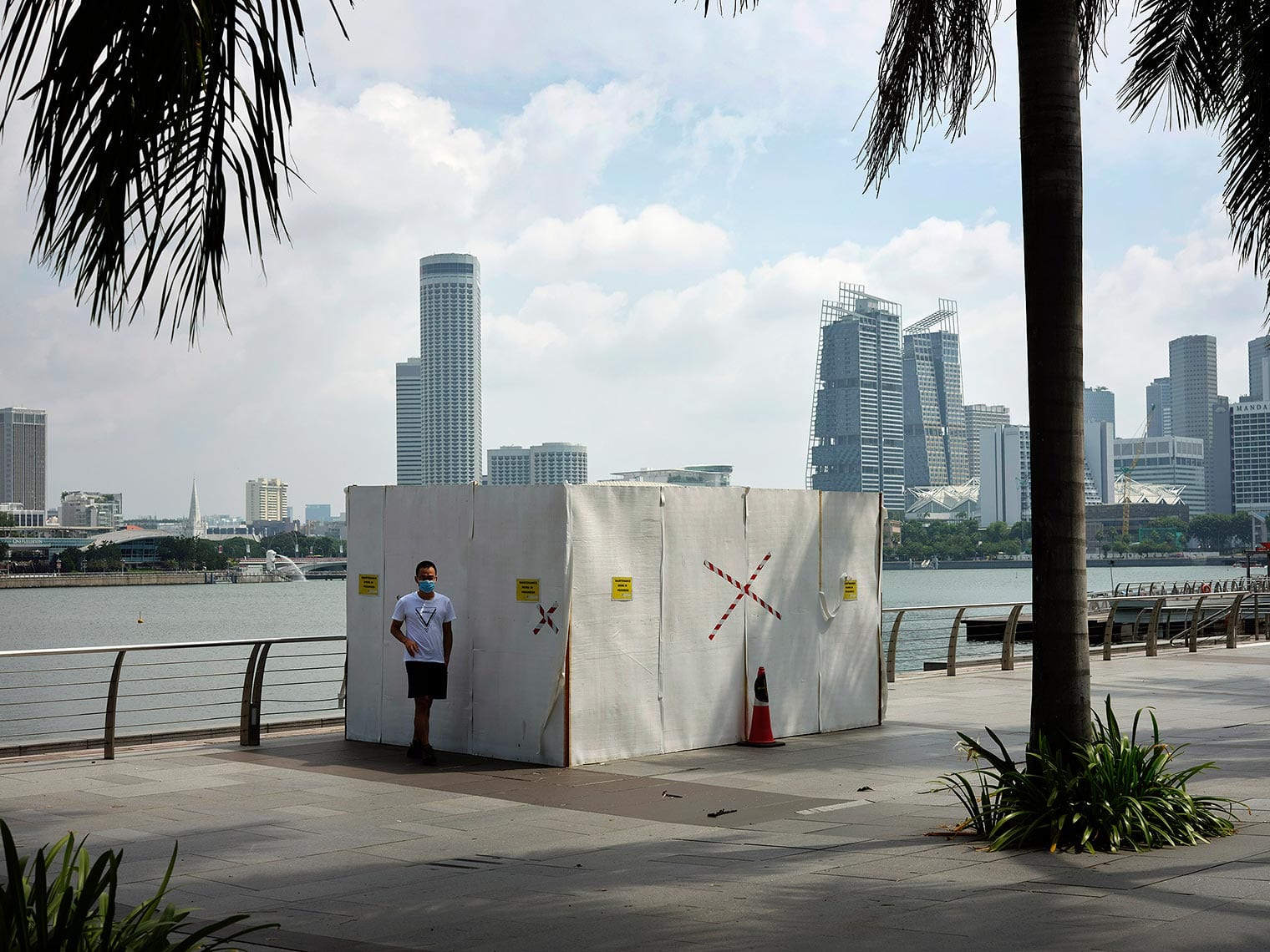 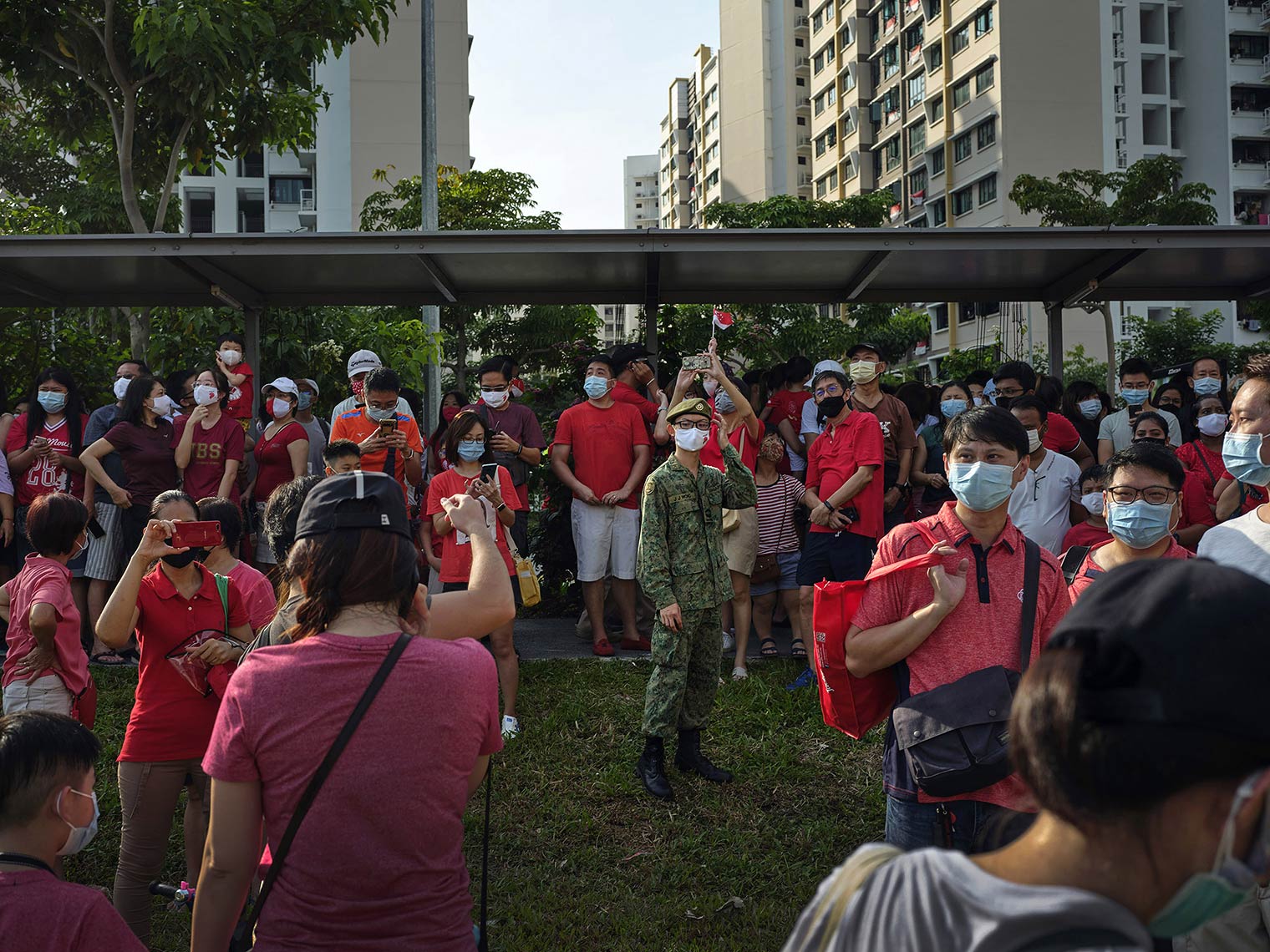 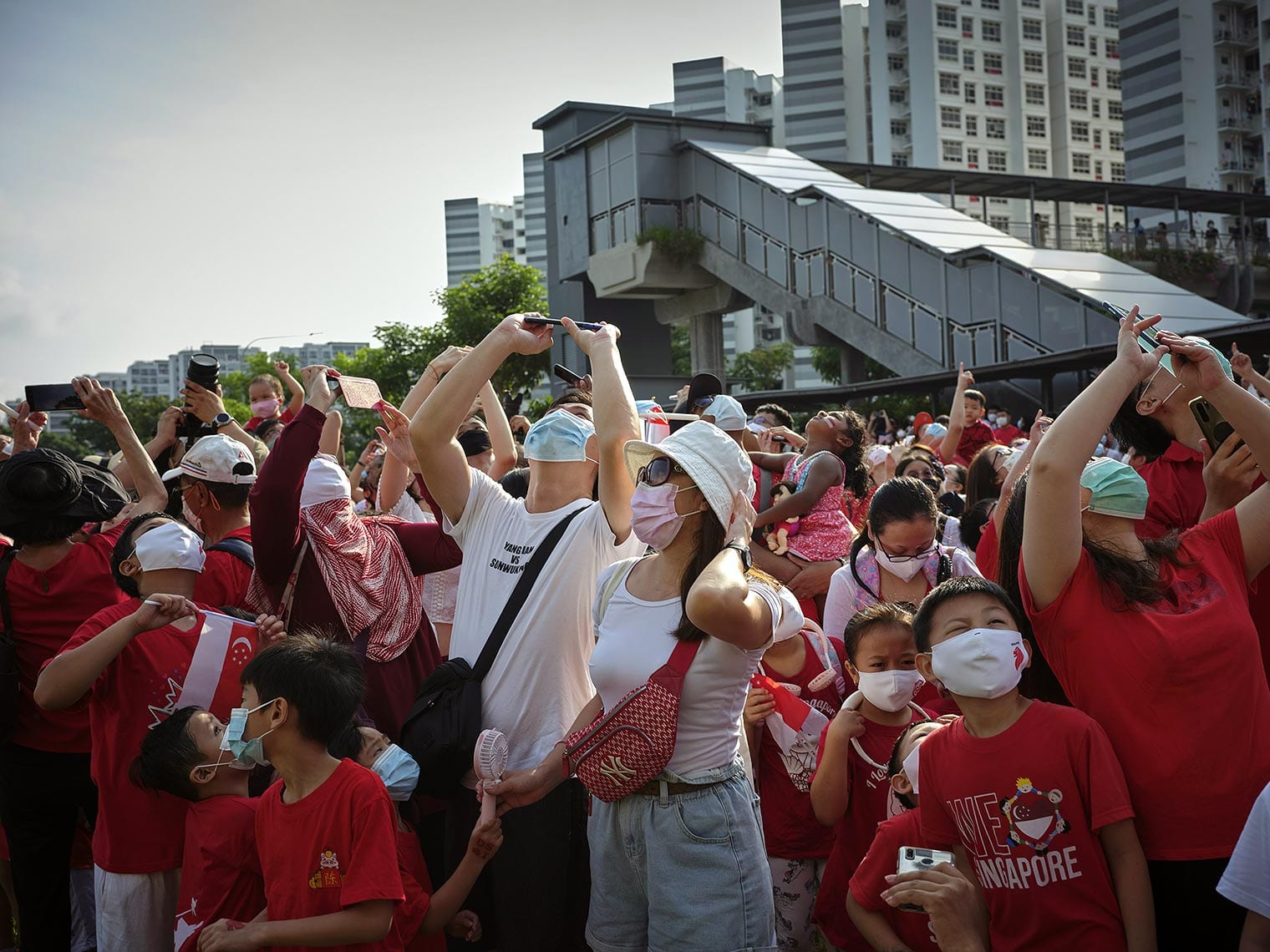 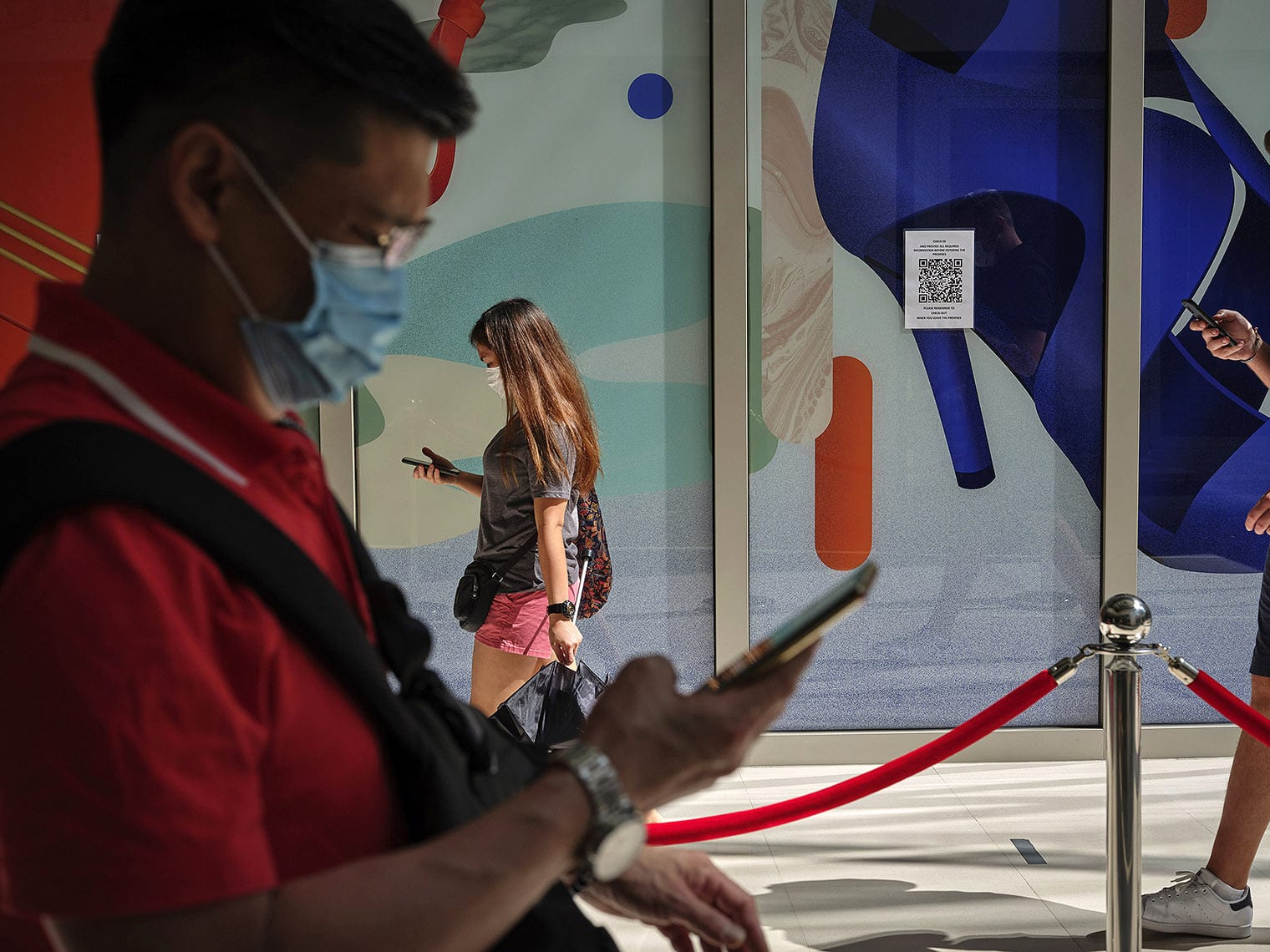 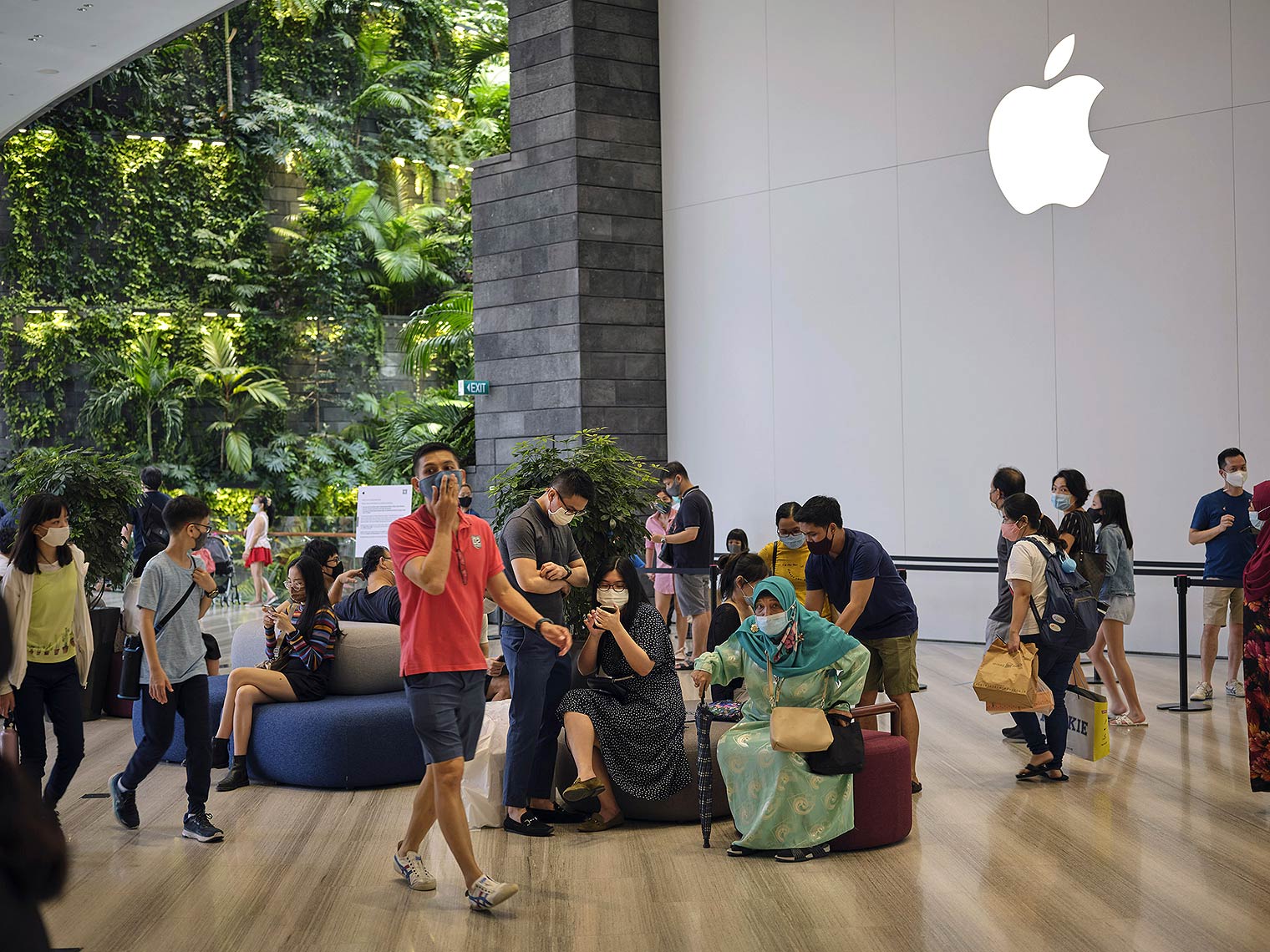 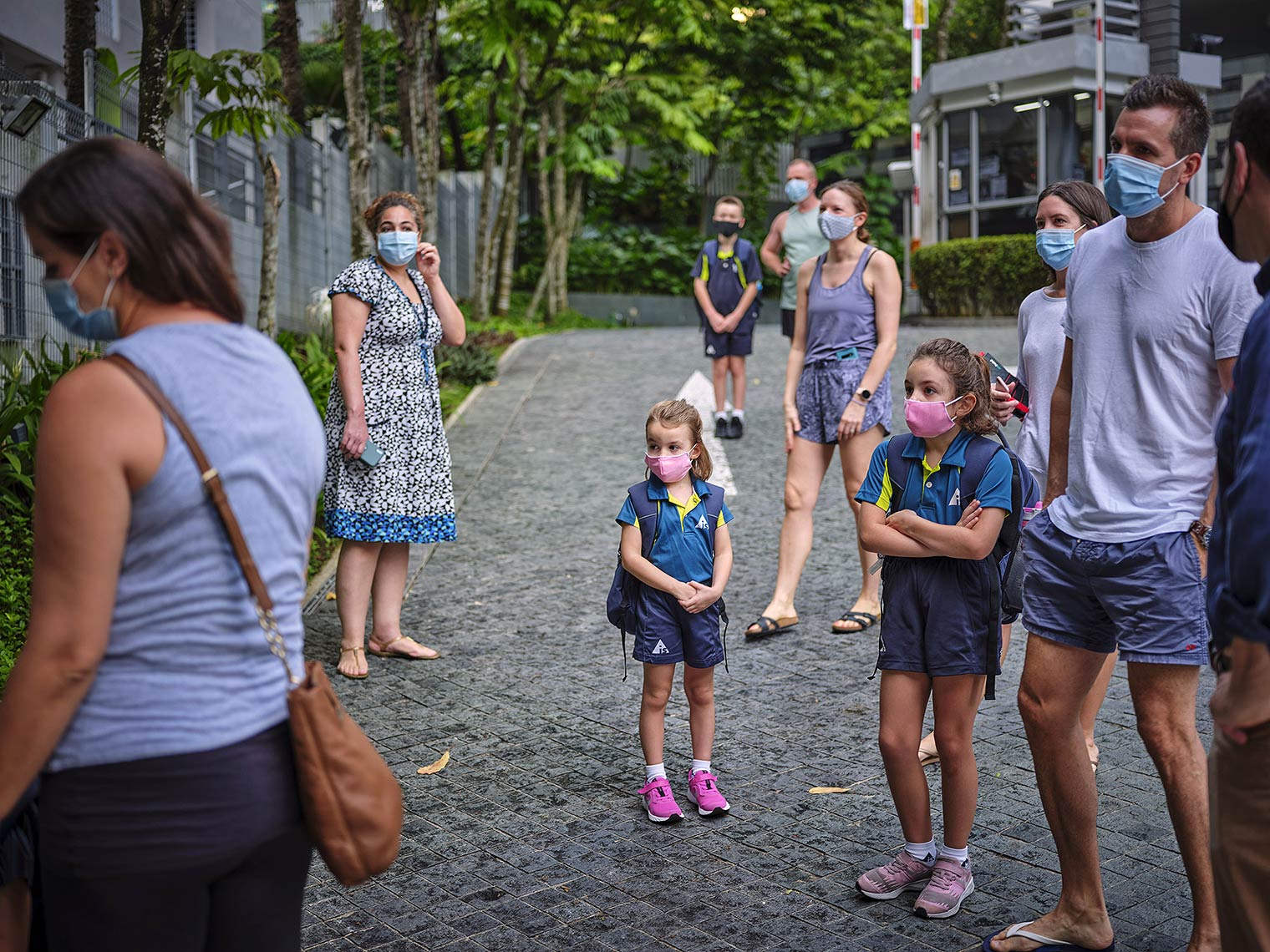 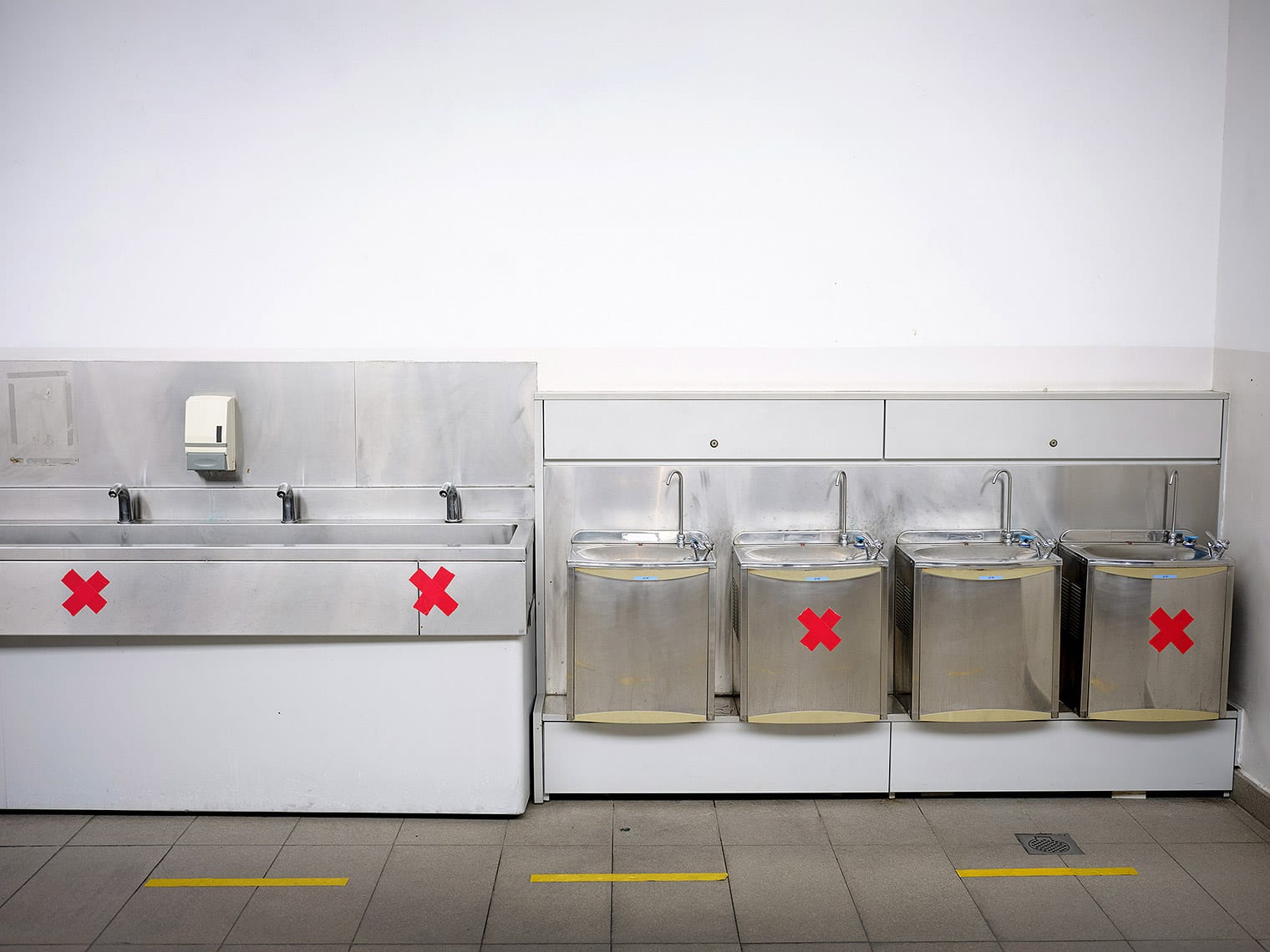 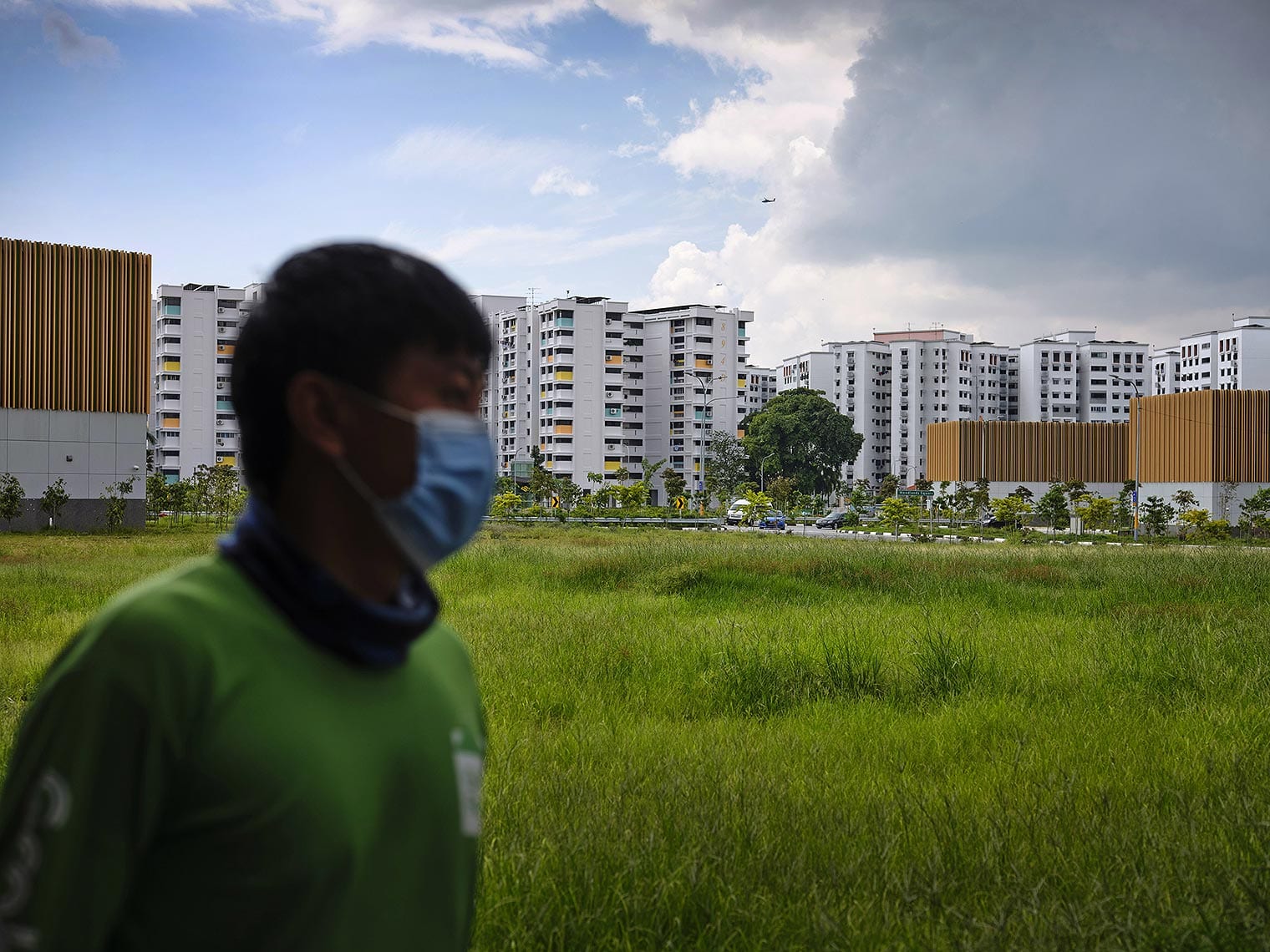 Singapore is unquestionably futuristic. Gravity-defying skyscrapers draped in vertical gardens crowd this modernist, air-conditioned city-state island on the equator. Nicknamed “The Little Red Dot,” it is also geographically tiny—about half the size of Los Angeles.

Because of its size, its population of 5.7 million can be managed and overseen with relative ease by the de facto one-party technocracy. In what constitutes an urban planning marvel, 91 percent of Singaporeans “own” their homes via ninety-nine-year leases in heavily subsidized, sparkling clean housing projects—flats dubbed “HDBs,” after the Housing Development Board. Singaporeans of different ethnicities are neatly dispersed in equal mixes via a quota system, so that no single-race enclave can form within these housing blocks.

Singapore is also one of the safest countries in the world, outranked only by nations such as Iceland and New Zealand. Crime is practically nonexistent—so much so that locals will save their lunch seats in public food courts (or “hawker centers”) by laying down their smartphones on shared tables while they step away to order their chicken rice. Kids as young as eight ride the city’s ubiquitous mass transit solo. And a misplaced handbag at a park will be anonymously picked up and gently placed on the nearest bench, obediently waiting for its owner.

Singapore has achieved this level of safety largely through a mixture of civic pride, rigorous surveillance, and an arguably draconian legal system. Petty crimes carry hefty fines and jail time. More serious crimes are occasionally met with caning. And drug trafficking, however small the quantity, amounts to death by hanging. This heavy-handed governing and surrender of civil liberties is a trade-off that Singaporeans have made for their security.

A case in point is how Singapore has handled COVID-19. Like other nations in the region, Singapore was blindsided in 2003 by severe acute respiratory syndrome (SARS) and spent the subsequent two decades fortifying its health-care system and pandemic readiness. So in January 2020, when rumors of a new virus began to spread, countries like Singapore and Taiwan had plans in place.

Singapore registered its first COVID-19 case on January 23—a traveler from Wuhan, China. Local transmission among the Singapore population began in February and March. And on April 7 the government imposed an eight-week “Circuit Breaker” lockdown of the city: mandatory face masks in public, stay-at-home notices, and severe limitations on people’s movements. No one was to leave their home except for quick trips to the market, take-away meals, or exercise, all only within one’s own neighborhood. An army of polo shirt–wearing “safe distancing ambassadors,” equipped with clipboards and smartphone cameras, patrolled the subways and hawker centers, handing out fines to anyone caught without a mask or standing too close.

The government-controlled media was quick to publicly condemn violators. For instance, a local man was sentenced to six weeks in jail for snubbing his two-week home quarantine and stepping out for some pork-rib soup. A particularly infamous incident occurred midway through the Circuit Breaker, when seven expats were charged for pub-crawling. These masked ang moh (white people) faces were perp-walked in front of news photographers at court appearances—their names, ages, and nationalities plastered alongside their mug shots on local news sites and fed to netizens hurling virtual feces in their direction. They eventually were fined approximately US$6,500, had their work passes revoked for life, and then were promptly expelled from the country.

Singapore’s Circuit Breaker may not have been necessary, and the city might have been able to gently ride the first wave of the pandemic, as did Taiwan—with sealed national borders, mandatory face masks, and meticulous contact tracing—and thus had minimal disruption to daily life. And Singapore’s early numbers were excellent. On March 15, Singapore registered 15 daily cases, 226 total cases, and no deaths. But a COVID time bomb was ticking underneath Singapore’s polished surface. By April 20, Singapore had 1,426 daily cases, 8,014 total cases, and 11 total deaths. Some of the rise had to do with COVID-infected Singaporeans returning home from abroad. But much of it could be attributed to a massive virus spread among the more than three hundred thousand migrant workers tasked with building and maintaining Singapore.

Like cities such as Dubai, Singapore relies heavily on foreign labor. As of 2019, Singapore had more than 1.4 million foreign workers. About a third are what Singaporeans label “PMETs” (professionals, managers, executives, and technicians)—expats from far-flung countries dispatched by multinational corporations and banks. The remaining are low-wage and/or low-skilled laborers. Within this second group are the migrant workers who muscle away on construction projects and infrastructure maintenance. These are overwhelmingly young men from India and Bangladesh, almost all of whom are confined to crowded dormitories scattered at the far edges of the city.

Conditions in these dormitories fostered rampant COVID infection: cramped rooms housing up to twenty workers each and shared bathrooms, sometimes with poor ventilation. Fortunately, most cases among these workers were not severe. But the Singapore government was blindsided not only by the huge spike in cases but also by an international public relations problem—a spotlight on the disparity between the more affluent native Singaporean population and the migrant labor force. Exacerbating the issue were recent reports of suicides among migrant workers.

Although these workers are largely segregated from the rest of the city’s population, there were certain contact points that proved to be super spreaders. One was an immense, blocks-long megastore in Singapore’s Little India neighborhood that laborers would frequent on days off. Another was a construction site in the heart of the Central Business District. And alongside the clusters originating at these sites were hundreds of other cases for which Singapore’s Multi-Ministry Task Force could not identify sources.

So on April 3,  Prime Minister Lee Hsien Loong addressed the population over live video (first in English, then Chinese, then Malay) and announced the Circuit Breaker. The initial plan was a twenty-eight-day lockdown. But two weeks in, the numbers had not improved, so the government tightened restrictions by closing down hair salons and several fast food outlets and severely limiting access to high-traffic “wet markets.” The government also tacked on an additional twenty-eight days, extending the Circuit Breaker to June 1. By the last day of the lockdown, Singapore had 35,292 total cases, 408 daily cases, and 25 total deaths.

On June 2, Singapore entered the first of its three-tiered recovery phases. Under Phase One, Singaporeans were allowed to get a simple haircut, and children could return to school to finish out their year, albeit with staggered weeks and under very strict social-distancing rules.

It wasn’t until two and a half weeks later that the public let out a collective sigh of gratitude, when the city abruptly announced the start of Phase Two and reopened its more than 170 malls. Singaporeans were once again able to visit their shop of choice. Restaurants and the beloved bubble tea shops also resumed business, and life on the island began to feel a bit more normal.

But after months of anxious lockdowns, “normal” in this island city-state has morphed into tolerating a maze of social-distancing lines, constant temperature checks, and ubiquitous hand-sanitizing stations. Singapore adopted from China the use of quick response (QR) codes to track individuals’ movements.  All residents (children included) are required to scan with their smartphones prominently placed QR codes posted at the entrances and exits to every mall, restaurant, kiosk, and public space (including beaches). These scans feed into a national SafeEntry system, which uploads the individual’s government identity number into a database that enables contact tracing. In mid-September the government will also begin distributing to all 5.7 million residents little plastic tokens that continuously communicate short-range Bluetooth signals to each other as a means of blanketing the island with full contract tracing. Combine this with the aforementioned “safe distancing ambassadors” and an estimated eighty-six thousand security cameras, and a highly efficient COVID-beating nanny state emerges.

These intensive measures have allowed the population some semblance of everyday life under COVID. People can freely visit friends and relatives, as long as they are in groups of five or less. The same rules apply for dining out. Malls are packed, and parks are brimming with exercisers, either panting for air through their masks or clutching them in their hands so they can immediately cover up once they’ve stopped, thus avoiding the wrath of the numerous camera phone–armed kaypohs (busybodies) eager to report any flaunters they spot. And in July, Singapore was able to conduct a successful national parliamentary election, in which 95 percent of the 2.6 million eligible voters cast their ballots (as predicted, the ruling People’s Action Party won 83 of 93 total seats).

As of September 9, the government reported one new case “in the community.” But there’s more to be gleaned from that day’s numbers. While one new community case is certainly good news, there were also sixty new cases in the dormitories, plus an additional fourteen imported cases from people entering the country. So one community case that day is really seventy-five new cases overall. Control of the population is ultimately an exercise in winning hearts and minds, however, and the government’s spin clearly intends to distinguish between the community and migrant workers.

In the end, the goal of Singapore’s civic leaders during COVID is to walk the fine line between reassuring their constituents that all is well and that trust in their leadership is warranted, and subtly frightening them into staying the course and continuing to do their part.

John Lee is an American photojournalist currently based in Singapore.