On the second day, we climb onto Sána for the first time. Our group stays on the hillside while others begin to walk around the fell or climb onto the top. Our intention is to sense into the landscape through practices of augury and divination, such as geomancy—a Middle-Eastern, African, and later European method of divination based on interpreting markings on the ground.

We begin to “read” the land by counting some of its features: 4 red berries, 30 reindeer droppings, 7 peaks, 235 lichen spots. 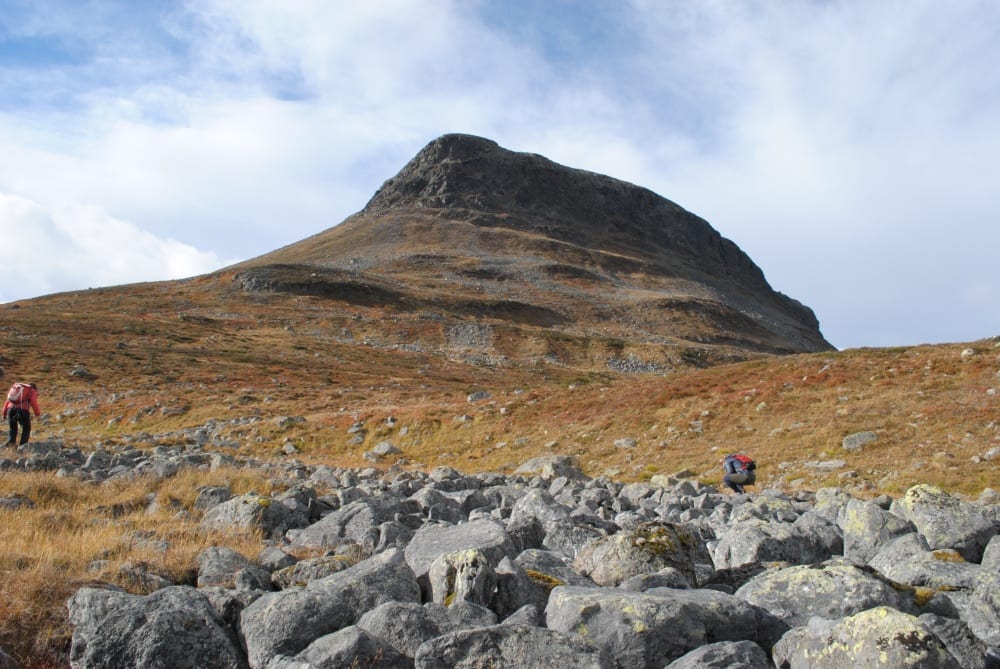 The first encounter with Sána unfolded a tangle of questions I had carried up the hill with me. Whose land were we on, and what were we doing there? What was the purpose of introducing a Middle-Eastern or Afro-European practice of earth divination in the northernmost corner of Fennoscandia? Would it be possible for us to “read” or communicate with land that was not ours and that most of us had never visited before? Would it respond to our approaches, and if it did, would we have capacity to recognize its will? Was this place available to us at all?

Based on previous discussions and on what I had read, I knew the land we were on had a layered cultural and colonial history that continues to shape the relations between the various actors and communities present in Kilpisjärvi, as well as between the Sámi and the surrounding nation-states. I also had a sense that it was inscribed within cultural codes and meanings I was not aware of or capable of reading. As our engagements with the landscape continued, these vague and troubled senses of place and locality repeatedly drew my attention to the cultural and geopolitical (rather than the geological) strata of the area.

The Sámi—an indigenous people, whose homelands extend over four nation-states currently known as Norway, Sweden, Finland, and Russia—have inhabited and used the Kilpisjärvi area for millennia and consider it to be part of their ancestral land and cultural territory, Sápmi. Their use of the lands has traditionally been regulated through customary laws and ancestral rights of use. According to Leena Heinämäki, Anne-Maria Magga and Eija Ojanlatva, the Sámi customary laws consist of local customs and practices that are based on traditional knowledge and passed from one generation to another orally and experientially. They guide the local land relations by defining how a certain area is to be used, who has access to it, and how one should behave in its vicinity. However, the laws and land rights are not static, but dynamic, and may change significantly over time. They may also vary from one region, community, and livelihood to another; some of them may belong to a certain person, family, or community, and cannot be shared with outsiders. The customs and meanings associated with a particular place may thus not be accessible to Sámi living in other areas, let alone visitors that have no connection to Sámi culture to begin with.1

Sámi scholar Elina Helander-Renvall describes the process of coming to know and understand the land as a continuous and subtle activity that is both situated in and dependent on a specific socio-ecological context.2 Researcher Taarna Valtonen extends this point by emphasizing the fact that the cultural landscape of the Sámi is always specific to the region they live in and cannot be generalized: it is the product of an over-generational and reciprocal relationship between human beings and the land. In old Sámi communities, each generation would leave a vast amount of cultural traces in the landscape, which is how it would learn to recognize and read the traces of the previous generations. However, these anthropogenic traces were mostly invisible, subtle, and gradual, or they would materialize in the form of cultural practices, experiences, interpretations, and expressions (such as place names, stories, yoiks, and sayings) rather than concrete marks and demarcations, which is why the landscape may seem “untouched,” “uninhabited,” or “natural” to those coming from settler societies.3

In the Kilpisjärvi area, Sámi ways of living and knowing have traditionally been intimately interwoven with the lives and deaths of reindeer: the deer were first hunted and then domesticated, through which they became an inseparable part of the nomadic lifestyle for which the reindeer-herding Sámi have become known.4 Consequently, the herders’ ways of perceiving and relating to the land are largely dependent on the movement and behavior of the reindeer and other elements associated with reindeer life, such as the weather, wind, snow, lichen, grass, wolverines, and mosquitos.5According to Helander-Renvall, herders have traditionally regarded the lands and their guardian spirits as living, intentional, and socially oriented entities that one can and should communicate with while herding, for example by asking them for permission when arriving and by giving thanks when leaving.6

Many of these cultural practices and forms of knowledge have been erased or disrupted by processes of colonization, administration, legislation, cultural assimilation, religious conversion, and modernization.7 Since the sixteenth century, the cultural landscape of the Kilpisjärvi area has been irreversibly altered by a series of national and colonial interventions, such as the arrival of Christian missionaries and Scandinavian settlers in the sixteenth and seventeenth centuries, and the closing of the national borders between Finland (then a part of Russia), Norway, and Sweden in 1852 and 1889. The border closures prevented both the Sámi and their reindeer from moving between Käsivarsi region and the shore of the Arctic Ocean and thus from sustaining their traditional livelihoods, which sparked a crisis and extensive reorganization of Sámi life in the area.8 Over the past century, growing numbers of tourists, vacationers, cottage-owners, entrepreneurs, scientists, and motorized-vehicle owners have settled in the area, which has also changed the landscape and the local reindeer-herding practices considerably, and caused tensions and occasional conflicts between the local actors and communities.9

Some of the aforementioned cultural traditions, colonial histories, and contested localities may be visible and recognizable to a visitor, whereas others require a culture- and context-specific way of “reading” the land. As someone whose family is mainly from the southwestern coast of Finland but partly traceable to Kittilä (a village 300 kilometers southeast of Kilpisjärvi), I may have some access to these layers, but most of them remain inaccessible to me. Yet I am deeply implicated in the colonial histories and practices to which the land and its people have been (and continue to be) subjected. 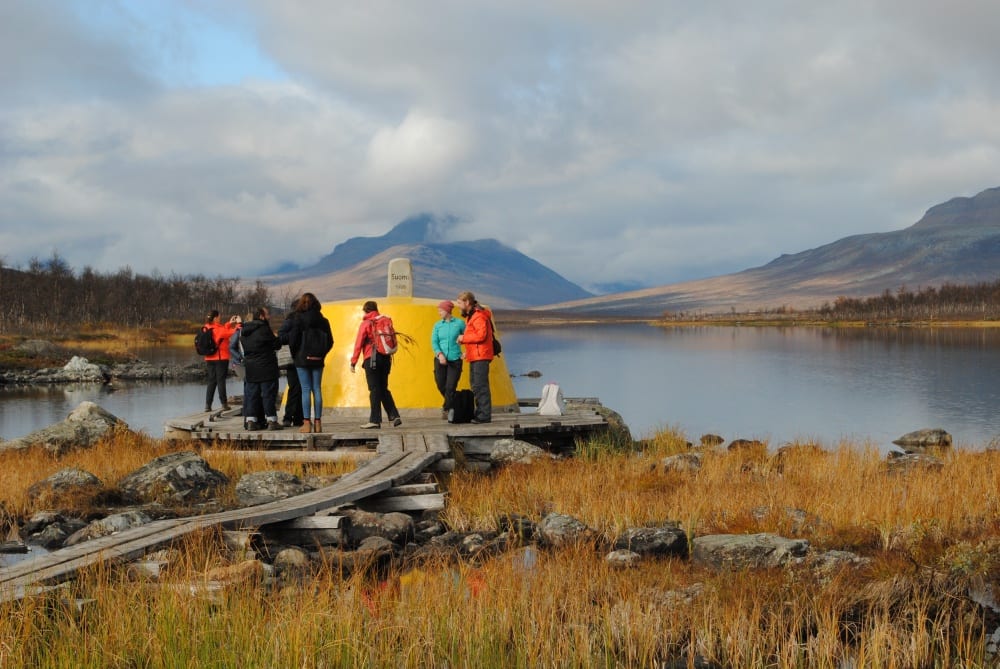 Throughout the week we spent in Kilpisjärvi, I asked how I could situate my body and practice in such a context. How could my ways of relating to this particular environment be grounded, localized, and decolonized? How could they be informed not only by the land, but by its cultural layers and colonial histories? Which sources and whose representations should I rely on in this process? While becoming acutely aware of my own cultural illiteracy and inability to act as a mediator between the local context and the visitors who had no prior knowledge or experience of it, I also felt like I was taking tentative baby steps towards learning how to listen to, if not communicate with and give back to, the land we were visiting.

Judging from this initial experience, Field_Notes might serve not only as a laboratory for transdisciplinary fieldwork and collaboration, but also as a test site for the gradual decolonization of artistic and scientific practices. From the point of view of a visiting artist, scientist, curator, educator, or researcher, this could mean a variety of things. In my case, it involved questioning the narratives I had previously internalized, sensitizing myself to the colonial undertones of my approaches to the land, and recognizing the multiple ways in which my own practice was entangled with the pasts and presents of the place at hand. I also tried to superimpose the multiple epistemologies at play in the event and juggle our sometimes contradictory and even disparate ways of relating to the environment we were in.

In the future, the process of decolonization might call for a more radical rethinking of the notions and practices of site-oriented art and artistic research—especially those involved in artistic and scientific fieldwork—in collaboration with the land and those who have inhabited and used it over multiple generations. It could also encourage us to inquire into the colonial legacy as well as the decolonial potential of practices and projects that are (or have previously been) conducted in the (sub)Artic, or in indigenous territories elsewhere on Earth. As curator and writer Taru Elfving emphasizes in her recent text “How to retreat in/to the frontiers?,” we need to keep asking what our engagements with such complex localities do, who gets to define their terms and conditions, who or what they serve, and what kind of traces they might leave: what remains of us and within us as we retreat from this territory and move onto the next location.10

The process of writing of this text was influenced by the conversations I had with Taru Elfving, Leena Valkeapää, Antti Salminen, and Erich Berger during and after Field_Notes.

Saara Hannula is an artist and researcher living and working in Helsinki, Finland. In the past decade, her artistic practice has consisted of perennial, collaborative, and context-specific research processes that manifest in the form of site-sensitive events and installations, as well as workshops, expositions, and publications. Her recent work is concerned with the energetics, materiality, and processuality of postnatural environments, and the practices and politics of land use. She is currently a doctoral candidate at the Performing Arts Research Center, Theatre Academy of the University of the Arts Helsinki.