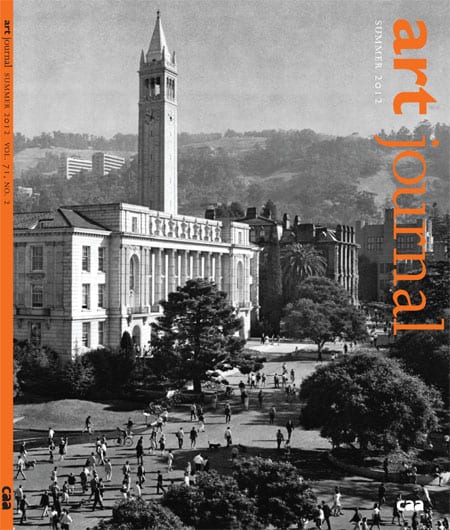 This issue of Art Journal comes after two issues that tightly revolved around a single concept: the medium of print (Winter 2011) and the Pacific Standard Time initiative (Spring 2012). Most of the essays, reviews, and artists’ projects in those two issues were commissioned; all were handpicked for the ways in which they worked together to survey a field and also to bring out its varied and perhaps conflicting aspects. It was something of a relief, then, to revert to the more usual Art Journal editorial mode: selecting articles submitted to the journal, most often by younger scholars and artists, that then make it through peer review. I did solicit a few of these authors directly, but not for work on a particular topic, just for whatever they were thinking on currently.

There are certainly rewards to seeing a conceptually integrated project come together, as built and voiced by many participants working toward a single goal, one that you hope makes a lasting statement of broad interest. Putting together this emphatically heterogeneous issue is a reminder of the advantages of a lighter editorial hand, of letting the individuals concerned be themselves, as it were. I’m reminded of how many things I don’t know about, couldn’t anticipate as subjects, much less conceive as a special issue or focus. Beyond editorial duties, it was simply a pleasure to read about Paolozzi and Khakhar—and also Adams and Magritte, artists whose work we think we know and perhaps too quickly pass over. Other essays attempt to undo the reductive grip that theoretical and historical generalizations have on artists, undoing their specificities or obscuring their real importance. Lorraine O’Grady’s beautiful writing is primary material on that subject.

I won’t attempt to extract a postmortem theme or generality; again, the value here is in the independence and specificity of artists, ideas, and authors. But the very diversity of the work in these pages reminds me of what is positive about the institutions of higher learning that serve as platforms for much of this production, for many of these producers—it’s easy to see only the faults, the clichés, the citations that genuflect before the powerful, the conservative dressed as radical aspects of academic work. Grant Kester and Julia Bryan-Wilson’s focus on the current threatened state of these institutions, this system, particularly as seen in the microcosm of the University of California, makes me curious about the effect of these wrenching changes on scholarship. Will serious research and creative work simply fade from the academic scene, unsupported as inefficient and un-”excellent,” or will the attacks on the system inspire more imaginative and resonant writing and art, inside it and out?