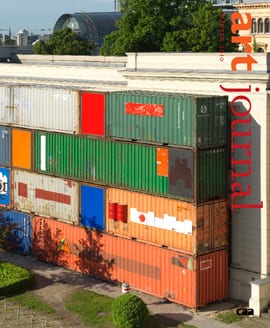 The Art Journal Award, CAA’s annual prize for the best article published in the magazine, has been awarded to the current issue’s feature on Land art, a group of essays collected and introduced by Kirsten Swenson. It is interesting that the Land-art projects discussed by Janet Kraynak, Paul Monty Paret, and Emily Eliza Scott eschew the extremely long view taken by Land artists in the 1960s and 1970s. Robert Smithson, Nancy Holt, and other Land artists looked back into prehistory, imagining a epochal stretch so long and slow that it hardly moved, so vast that human civilization was just a flicker within its expanse. The more recent generation considered here focuses on a shorter-term history, directly or obliquely addressing modern life’s interaction with nature: airports and the evacuation of rural America, economic injustice in communities along the highway, global tourism and utopia in rural Thailand. Santiago Sierra’s Submission, discussed in a separate essay by Kelly Baum, attacks power relationships at the US-Mexican border. Geopolitical reality similarly implodes in Fabian Marcaccio’s DIY black hole–dollar sculpture.

This recent history feels like it’s moving quickly, with neither the positive progressive impetus imagined by earlier modernists nor the violent dynamism heralded by the Futurists. Zoe Leonard focuses less on the changed present than on the past itself. Her photographic series Analogue, the subject of an essay by Jordan Troeller, tracks with melancholy the shops and street life of Manhattan’s Lower East Side—not obviously lovely subjects; nonetheless, at the moment when that culture receded, the artist said, “I began to realize I would miss all this . . .” Other aspects of modernity leave less room for nostalgia, as in the sisal factories of East Africa, the legacy of German colonial adventures, depicted in Zarina Bhimji’s film Waiting. Even here, as in Leonard’s photographs, beauty haunts the obdurate materials, the still atmosphere of the spaces, the solidity of the light.

Also embedded in the recent past are its myriad unrealized anticipations. Michel Oren’s fascinating essay on USCO’s experimental light shows details a form that once seemed the beacon of a new historical moment, with implications far beyond the realm of art. That moment simply never arrived. As Jonas Mekas said, “Something is happening and is happening fast . . . everybody feels it and is waiting—often, desperately.” History is moving, of course, but the direction is not clear. Chika Okeke-Agulu took the title of his recent exhibition from an African expression, “Who knows tomorrow?” The expression insists that “no condition is permanent,” a statement whose nature as terrifying or reassuring depends largely on one’s social position and perspective. The exhibition’s projects explored Germany’s colonial history with Africa as it shapes the present, without determining the future.

That inscrutability—“a question that keeps coming back,” as eteam puts it—suffuses even apparently traditional art forms. Both possibility and doubt pervade David Reed’s deeply personal evocation of Philip Guston’s teaching and being. Guston once said in a lecture, “When you paint things they change into something else, something totally unpredictable.” Even the smallest experience of making and experiencing art can profoundly bear out the truth of history: no one knows what will happen next.