On the occasion of the release of the multimedia e-book version of Waiting for Godot in New Orleans: A Field Guide (copublished by Badlands Unlimited and Creative Time Books), Paul Chan writes about some of the secrets hidden in plain sight within the maps and notes that make up the documentation of this multifaceted work.

The first map I made was in 2004. It was done with a group calling itself Friends of William Blake. I drew Manhattan south of Central Park and we detailed all the events and activities in New York affiliated with the 2004 Republican National Convention. The idea was to make a free map that helped people “get in or out of the way” of the RNC. It worked—to the extent that we showed both protesters and clueless conventioneers the strip-club where the Utah Republican delegation was hosting a fundraiser, and the midtown location of the Dick Cheney gala. The map did not show directions as much as sow havoc.

I have made a number of maps since, all more or less useless for people looking for directions or tips on where to go. Some look like maps and others look like nothing in particular. I have learned that a good map shows you ways of getting lost that make ways of getting where you want to go seem pointless or insignificant, wherever there may be. A good map is also a great place to hide things in plain sight, like messages, or pieces of information that should be preserved but not disclosed—the purloined letter as a compositional principle.

Take, for instance, this map. 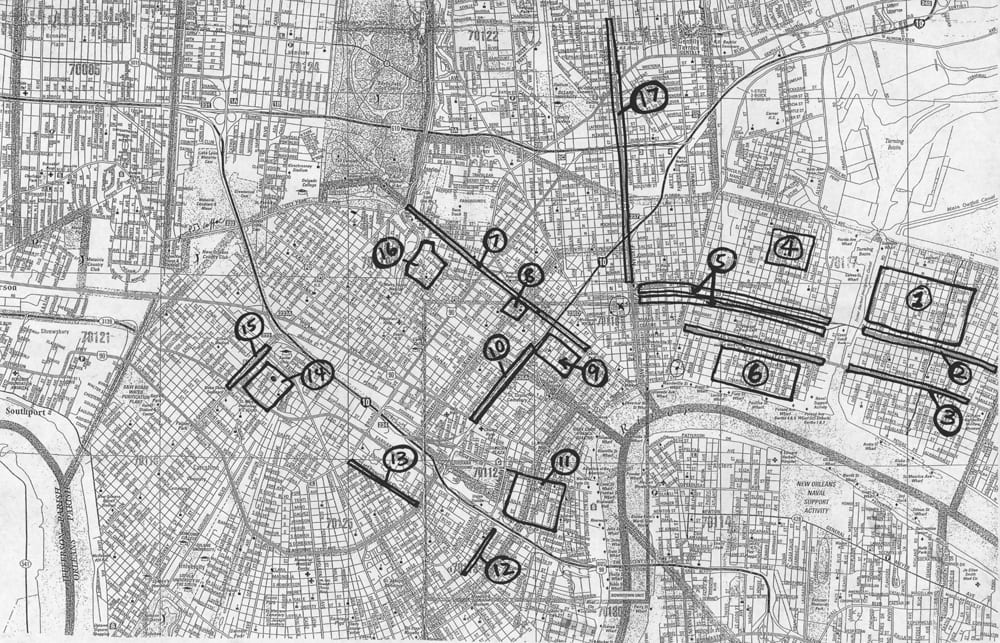 This was the map of New Orleans that I drew on to pinpoint the neighborhoods where we concentrated our organizing efforts to create Godot. The square numbered “1” is the Lower Ninth Ward, the neighborhood where we premiered the play. Number 4 is where we rehearsed during the day, in a decrepit and abandoned school. And 17 is the street where the best taco trucks in New Orleans were parked. This map shows a city divided not by class or race but by aesthetic compulsion. 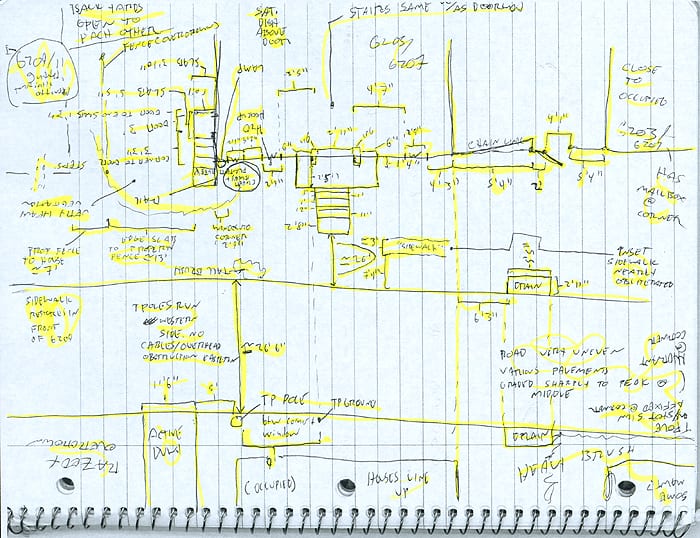 This map was drawn by Gavin Kroeber, a producer on the project. It shows a top view of the Godot “stage” in Gentilly, the other neighborhood in New Orleans where we mounted the play in front of an abandoned house. What I have always appreciated about this map (besides how the yellow highlight illuminates the drawing like a neon sign) is how Gavin measured the depth of each concrete step (center of map) leading up to the house. And this was important because the actors needed to know exactly how many steps they needed to take to get from the wreck of a lawn to the front door in some of the scenes. The exactingness made the parts more whole. 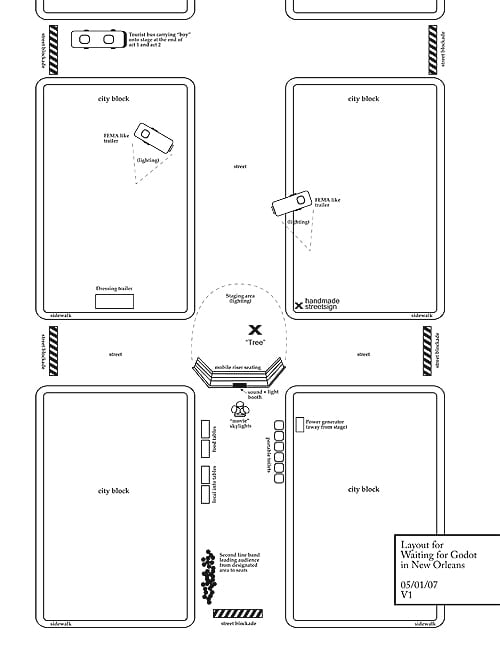 This was the first map I drew to formalize what I wanted in the staging of Godot in the Lower Ninth Ward. It expresses none of the precision in Gavin’s drawing. Still, what turned out essentially followed what was drawn, but only by way of a determinate negation. What I mean is that whatever I start with, it is always too much. This too-muchness must be stripped down and transformed so that what is left is a kind of de-expression of what was initially imagined. In a sense, then, what I drew here reflects what actually happened insofar as the drawing represents what the work should not be. Godot stayed true to form by becoming less than what I wanted, and more of what it ought to be. In the end, there were no FEMA-like trailers in the background. Luckily there were no movie lights at the foot of the proscenium seating. And we never really had any street blockades, which made it possible for cars, bicyclists, or anyone walking in the neighborhood to literally wander onto the stage, which was really just the middle of a street intersection. 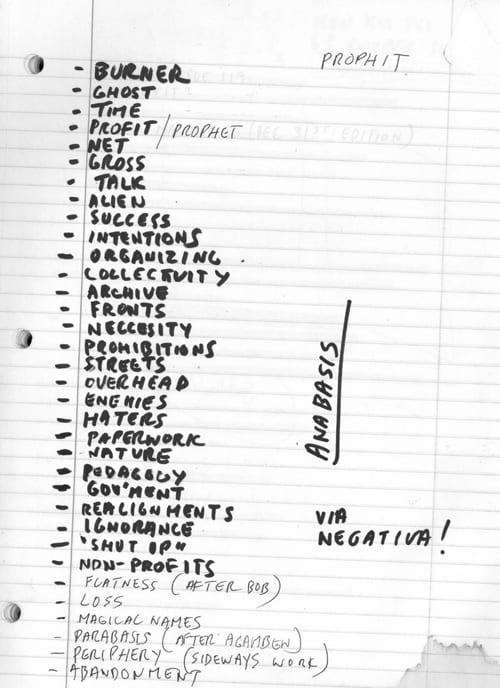 This list recounts the most memorable or useful words and phrases that I came across or heard during Godot. A burner, for example, is a disposable cell phone. And I primarily used burners during my time in New Orleans because I had to limit the ability of people to reach me while I was working (or not working). I still use them today. In a way, this is the first conceptual map for the project. These key words and phrases became the coordinates for finding the grounding that eventually became the work. Anabasis is the name of a work by the Greek writer and historian Xenophon. It is in essence a story about finding one’s way home without knowing how. Flatness refers to the challenge of collapsing the distinction between foreground and background, or figure and ground, to create a compositional field devoid of any hierarchical order, where every element is equidistant from the imaginary membrane separating the outside and inside (of the work). 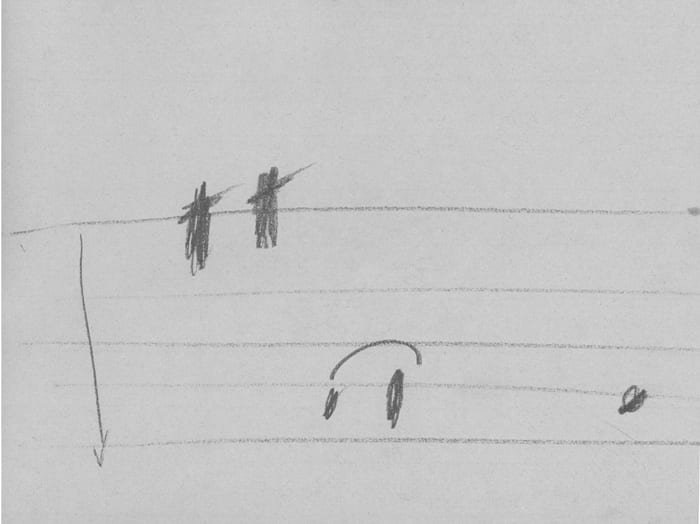 This is not a map. But it is something that I drew which eventually became an emblem of sorts for Godot. It is barely a drawing and hardly a score. Still, it’s all here. Gogo and Didi. Pozzo and Lucky. The boy. Whenever I had a spare moment during the production or when no one was around, I would take this out of a battered manila folder to look at it, and wonder.

Waiting for Godot in New Orleans: A Field Guide (multimedia e-book edition), edited by Paul Chan, is now available on Apple iBooks (for the ipad and iphone) and Amazon. For more information, please visit Badlands Unlimited.